The 7 Most Terrifyingly Huge Things in the History of Nature

The 7 Most Terrifyingly Huge Things in the History of Nature

We may be the undisputed kings of the food chain, but when it comes to being pant-soilingly huge, we come up a bit short. We can hang out with tiny dogs and house cats until we feel like the T-Rex of our home -- but in the back of our mind, we know. Nature has produced terrifyingly huge and horrific organisms that could kill us without noticing, either by stepping on us, accidentally swallowing us the way we might swallow a fly or simply stopping our heart with sheer terror.

A Crab as Big as Your Car

They say a picture is worth a thousand words. 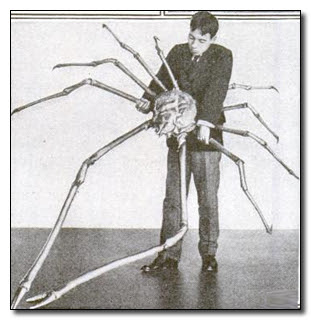 Japanese spider crabs, in what we can only assume is a cruel joke from God, possess all the most terrifying qualities of each of its namesakes. Lets just make a list, shall we? From spiders it has:

The Prehistoric Whale With 14-Inch Teeth

For being the biggest animals in the ocean, whales are usually nothing more than floating islands, filter-feeding on tiny shrimp. But set your time machine back far enough, and you'll find the waters full of insanity: 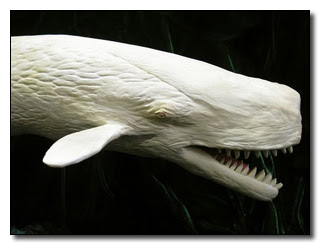 Yep, Moby Dick had nothing on Livyatan Melvilli. If you haven't guessed, this thing was named after Herman Melville, and a giant sea monster from the Bible.
What could a katana-toothed sperm whale eat, though? Whatever the hell it wanted to. 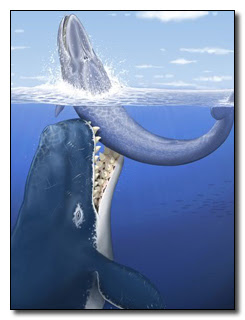 The Livyatan lived in a time when the ocean's whale species were growing larger and diversifying, which means Moby Monster feasted mainly on other whales. It was a hypercarnivore, which means it got 70 percent of its sustenance from meat, which puts it in the same category as big cats, eagles and sharks. Though we prefer to think "hypercarnivore" means it hunted like Gary Busey with a pound of stimulants and a mouthful of steak knives. 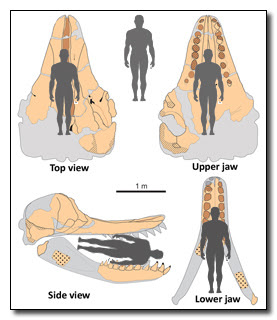 It shared the same oceans as another giant thank-God-for-extinction-events horror, the Megalodon. So if you decide to go swimming during your time travel adventure, your fate will either be "eaten by giant shark" or "eaten by murderous sperm whale," and in both cases, it'd probably happen because the monster accidentally devoured you while trying to eat the comparatively smaller creature that was in the process of eating you.
The Dinosaur that Makes Other Dinosaurs Look Like Lap Dogs

Picture the biggest of the dinosaurs in Jurassic Park (specifically, the Brachiosaurus, aka the gigantic dinosaur with the long neck). Now let's use it to give you some sense of scale as to just how huge the Amphicoelias Fragillimus was. Here's Dr. Ian Malcolm, naked, standing next to a Brachiosaurus ...
Although paleontologists have nothing to work with other than a drawing of one bone from this monster, it was large enough to give us a rough idea of the obscene size of it. Do you remember this scene from King Kong? 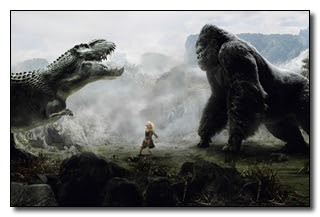 Amphicoelias Fragillimus was not only taller than King Kong or that 'rex, it was tall enough to have walked over them. This beast was big enough to have eaten you out of a six-story window. It stretched roughly 30-feet longer than Godzilla was tall, which according to Homeland Security, registers it as a class-G movie monster.
The Thousand-Pound Cat

But why are we looking to the distant past and Japan for monstrous creatures that can bite you in half? They didn't all go extinct, you know. Some of them are just being invented. Like the liger. 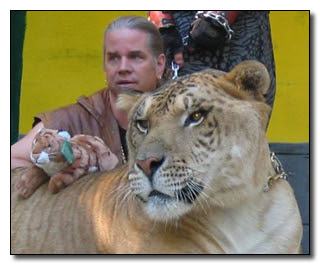 A liger, as Napoleon Dynamite fans know, is what happens when a lion and a tiger end up in the same cage and they make the ultimate choice When the offspring stands on its hind legs, it's twice as tall as a man:
Antlers Twice the Size of a Man 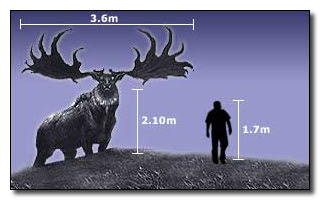 You see, back in the day, deer were essentially bears with what can only be called "antlers" in the Crocodile Dundee School of Zoology -- meaning that if you think deer today have massive antlers, well
Sperm 20 Times the Size of the Creature it Comes From

Wait, why is a fruit fly on this list? We have giant predators ripped from the terror center of the brain, and we're including the little bastards you have to shoo away from your bananas? Well, it's not the fruit fly that's terrifyingly huge. Let's just say the fly is packing some serious heat in the downstairs region.
A Fungus the Size of a Small Airport

Picture a fungus. Maybe you have some growing in your basement.
So, scientists discovered that honey mushrooms growing in a forest in eastern Oregon were genetically identical. Once they began probing around they discovered that the mycelia -- the roots of the fungus, which also make up most for the actual living fungus -- was spread over an area covering 2,200 acres, or about 3.5 square miles. It's a single living thing, but it'd take you more than half an hour to walk from one end of it to the other.

Email ThisBlogThis!Share to TwitterShare to FacebookShare to Pinterest
Labels: A Crab as Big as Your Car, A Fungus, Antlers Twice the Size of a Man, Sperm 20 Times the Size of the Creature it Comes From, The 7 Most Terrifyingly Huge Things in the History of Nature