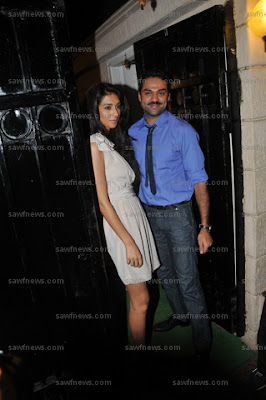 Preeti made her Bollywood debut with the recently released Shor in the City, one of the three films whose success was being celebrated. The other two films being Taaryanche Bait (Marathi) and Ragini MMS.

Abhay, 35, was hard to recognize in a thick black mustache, deep tan and dress shirt replete with tie. The facial foliage probably comes from his makeover in the currenlty filming intense political thriller Shanghai, being directed by Dibakar Banerjee.

Abhay didn't leave Preeti's side the entire evening and the soon to be engaged couple cheerily posed for photogs.

Preeti, 29, looked ravishing in a French Connection Corsage Shoulder Dress with a plunging V neckline, statement shoulders with a tiered ruffle design, stud trim, a fitted waist and a tie fastening at back.

Earlier this month, there were reports that Abhay and Preeti had postponed their engagement due to a death in the family.

"Preeti and Abhay are with each other around the clock, despite having separate addresses. There has been a death in the family (Dharmendra's elder sister passed away) and that's why they are not rushing their engagement. When the family overcomes the sorrow, Abhay and Preeti will exchange rings, maybe later this month or in June," a source told TOI.

Before meeting Preeti in 2008, Abhay was never reported to be in a steady relationship.

Preeti, a UK citizen and former Miss Great Britain (2006), dated someone in the UK for two years following her pageant win.

Preeti impressed viewers with her short and sexy role as a model in Shor in the City, but has yet to sign her second film.