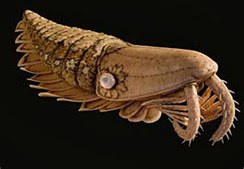 Ancient sea monsters. Bizarre shrimp-like monsters that were the world's largest predators for millions of years grew even larger and survived much longer than thought, scientists find.
The creatures, known as anomalocaridids, were giant predators (ranging from 2 to possibly 6 feet in length) with soft-jointed bodies and toothy maws with spiny limbs in front to snag worms and other prey. [Image of the ancient sea monster]

"They were really at the top of the food chain," said researcher Peter Van Roy, a paleobiologist at Ghent University in Belgium, and formerly at Yale. "The uncontested top predators of their time."

Past research showed they dominated the seas during the early and middle Cambrian period 542 million to 501 million years ago, a span of time known for the "Cambrian Explosion" that saw the appearance of all the major animal groups and the establishment of complex ecosystems.

"The anomalocaridids are one of the most iconic groups of Cambrian animals," said researcher Derek Briggs, director of the Yale Peabody Museum of Natural History. "These giant invertebrate predators and scavengers have come to symbolize the unfamiliar morphologies displayed by organisms that branched off early from lineages leading to modern marine animals and then went extinct.

Fossils suggested these ancient marine predators grew to about 2 feet (0.6 meters) long. Prior studies also suggested they died out at the end of the Cambrian.

"The Moroccan specimens are the largest anomalocaridids known to date — they are about double the size of their Cambrian counterparts," Van Roy told LiveScience. "There have been suggestions of Cambrian anomalocaridids of over 6 feet (2 meters) in length, but these estimates are extrapolations from very fragmentary material, and hence not too reliable."

Moreover, these newly examined creatures date back to the period that followed the Cambrian, the early Ordovician, 488 million to 472 million years ago, meaning these predators lived for 30 million years longer than previously known.
Posted by admin at 6:55 AM