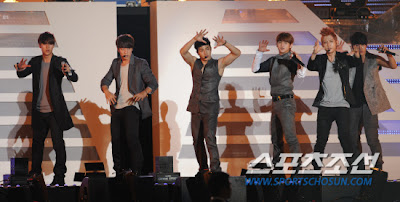 After making a comeback with their first official album, “Fiction and Fact“, B2ST’s main vocalist Yoseob sat down for an interview with Sports Chosun to speak for the group on idols being stereotyped as ‘three-second singers’.

The stereotype first came about after idol groups began adding members that sang no more than three seconds’ worth of lines; the weight of the song was placed more firmly onto the main vocalist instead.

Addressing the stereotype, Yoseob said, “We want to break that stereotype. It’s not right for groups to put the weight of the song on one member alone, and we’ve reached a point where we’re now regarded as ‘three-second singers’.”


He continued, “Through this album, we hope to show that each of our members have live vocal talents. We practiced very hard and garnered more skills along the way, Dongwoon especially. In order to show our improvements, we made sure to distribute the parts evenly so that fans can hear each of our voices.”

When asked whether it was difficult for them to pull off “Fiction” live since the tone is higher than what male groups usually go for, he replied, “The only hard part was the initial recording process. We were busy preparing for our comeback and recorded about two songs a day. When we had to redo recordings or complete intros, we’d do three songs in a day. Compared to ‘Shock‘ and ‘Soom‘, I think this song fits us the best. It’s a lot easier to sing.”

Reporters asked, “Don’t you think it’s easier because you’ve improved?”, to which Yoseob humbly replied, “No, it’s not like that at all. I still have a long way to go.”