Bids for Beatrice's headpiece pass $120,000
There were 38 vying for royal wedding Philip Treacy sensation on eBay on Saturday 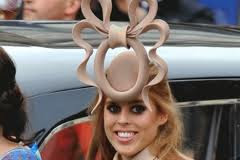 Bids for Beatrice's headpiece pass $120,000. Auction site eBay says a bidder has offered 75,000 pounds ($120,000) for the spiraling headpiece worn by Princess Beatrice to last month's royal wedding.
The 22-year-old granddaughter of Queen Elizabeth II startled commentators with the swirling hat she wore to the wedding of her cousin Prince William and Kate Middleton.

The silk Philip Treacy creation has been compared to antlers, a toilet seat and a pretzel, and has been photoshopped into scores of unlikely scenarios on the Internet.

Beatrice has taken the joke in stride and put the hat on sale for charity. Proceeds will go to UNICEF and Children in Crisis.

On Saturday 38 bidders were competing for the hat, described on eBay as a "unique sculptural celebratory headpiece."