Blanchett under fire over carbon tax 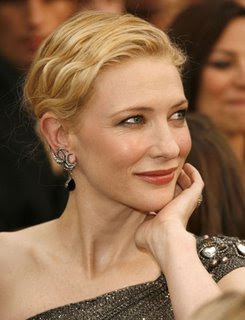 Hollywood A-lister Cate Blanchett found herself under fire for fronting a campaign promoting the government’s planned carbon tax, with critics saying she is out of touch with ordinary Australians.The wealthy Oscar winner features in a new advert, funded by a coalition of unions and green groups, urging Australians to “Say Yes” to a tax on carbon.Australians are among the world’s worst per capita carbon polluters and Labor Prime Minister Julia Gillard has proposed a carbon tax to be levied on major industrial polluters by July 1, 2012.She then plans a full emissions trading scheme in three to five years.But the proposals are not popular, with the conservative opposition saying a tax would damage the economy and drive up the cost of living by making energy far more expensive, bumping up electricity bills.”$53 million Hollywood superstar tells Aussie families to pay up”, the Sydney Sunday Telegraph blared on its front page, referring to how much Blanchett is worth.”Cate Blanchett has proved she is just another morally vain Hollywood star trying to justify her great good fortune by preaching to the rest of us about climate change,” the paper said in a comment piece.The Australian Family Association said she was out of touch.”It’s nice to have a multi-millionaire who won’t be impacted by it telling you how great it is. It’s easy for her to advocate it, she’s one of the people who can afford to pay it,” the association said, according to the newspaper.”There are people who have no comfort zone and no room to move.”Blanchett made no comment but her co-star in the advert, Australian actor Michael Caton, defended his role.”I’m sure people will criticise me but I thought long and hard and I really believe in this, so I’m speaking up for it,” he said.Treasurer Wayne Swan said Blanchett was being unfairly targeted.”I admire people who speak their views and Cate Blanchett, along with many others, has a strong view that Australia needs to price carbon,” he said.”It’s the responsible thing to do for citizens to speak up.”The Climate Institute, an independent research organisation, also defended the actress.”There is a serious scare campaign going on,” spokesman John Connor told the ABC.
“So I am not surprised by some of the personal attacks. But what we’re trying to do is focus on the policies and the issues and that a range of Australians are well behind this campaign.”Earlier this month, a national poll by The Australian newspaper showed 60 percent of voters were opposed to a carbon tax. Only 30 percent of voters supported the plan and 10 percent were undecided.
Posted by admin at 1:10 AM