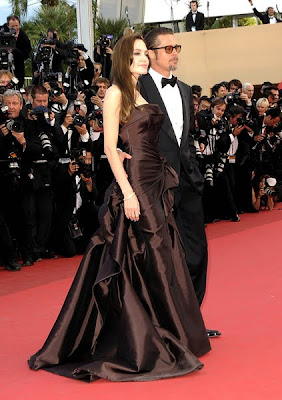 Powerhouse celebrity couple Brad Pitt and Angelina Jolie may soon be tying the knot despite having said they would wait until marriage was legal for gay couples as well.

Indeed, the Tree of Life actor, Brad Pitt told USA Weekend in a candid sit-down that tying the knot with partner Jolie feels like the next natural step for his growing family.

"The kids ask about marriage," he revealed. “It's meaning more and more to them. So it's something we've got to look at.”

At 47 years, Pitt believes embracing parenthood and nurturing a brood of six children, ages 2 to 9, has profoundly transformed him.

There are no secrets at our house,” Pitt says, “We tell the kids, ‘Mom and Dad are going off to kiss.' They go, ‘Eww, gross!' But we demand it.”

Jolie and Pitt have been the focus of pap-frenzy over the past years and like any loving parent would Pitt fears for his children’s safety. Worrying he says, “keep me up at night.”

“We're hunted. Our kids have to live behind a gate. Outside, there are people with cameras.

Despite all the media scrutiny, Pitt confesses, “[But] I'll take the trade-off. I never knew I was capable of experiencing so much love.”

Pitt confesses his brood of 3 adopted and 3 biological children with partner Jolie does “seems a bit extreme.” Nevertheless, he prefers it so. “I like extremes. I guess I've always operated that way.”

“Angie and I do everything we can to carve out some semblance of normalcy for them, to re-create the kinds of moments that were special for us. It's not unusual for the kids to be covered in paint. We have mud fights. It's chaos from morning until the lights go out, and sometimes after that.”

Traveling between sets and homes, Pitt describes his family’s life as “…pretty nomadic.”

“On the road, we're a military mobile unit,” he says. “The kids have got their stuff down to one backpack, and they're each responsible for their own bag. Mom does the packing; she's quite gifted at that. Puts in just what we need — nothing extra.”

In his upcoming film, the Tree of Life, Pitt plays a disciplinarian, sometimes abusive, father of three boys in 1950sTexas. The movie received a standing ovation at its premiere at the Cannes Film Festival.