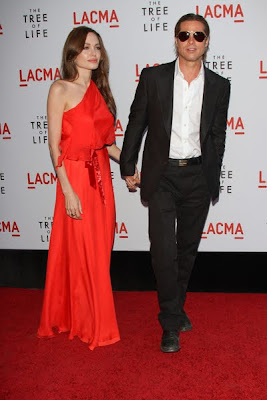 Brad Pitt rues the media attention on his family that forces his kids to live behind a gate, but says he enjoys the love that the family shares.

"We're hunted," he tells USA Weekend in an interview. "Our kids have to live behind a gate. Outside, there are people with cameras.

"But I'll take the trade-off. I never knew I was capable of experiencing so much love."

Brad Pitt and Angelina Jolie have been in a stable relationship for almost six years during which they have progressed from being upstart lovers to responsible parents with a brood of six kids and multiple homes, yet public interest in their relationship remain intense; not without reason though, because the relationship wrecked Pitt's high profile marriage with Jennifer Aniston. Also, Jolie and Pitt came together carrying a baggage of successive failed past romances, some of which were turbulent.

Another reason why media attention has not waned is because Brad and Angelina have chosen to raise six children, when most parents find raising two a challenge. Three of their children are adopted, each from a different country. The size of their brood appears to make light of the parenting challenge, especially considering their nomadic lifestyle as film makers and actors working on sets around the globe.

However, Brand and Angelina take parenting seriously and a large part of of Pitts interview focused on their children and how, because of them, life has changed for the couple.

"Kids hold up a mirror to you," Brad says. "You can't make excuses. You've got to make sure they've brushed their teeth and eaten a good breakfast. You want to be present if they wake up with a bad dream."

As to their lifestyle, Brad admits, "We're pretty nomadic. We go where the crops are.'

He refers to the couple's multi-house Los Angeles compound as "our base camp."

They have leased a 1,000-acre estate - Château Miraval - in Provence, South France, that serves as their getaway.

Brad admits his family life "seems a bit extreme." But "I like extremes. I guess I've always operated that way."

Brad regrets not being able to give their children the carefree life that he enjoyed while growing up.

"On the road, we're a military mobile unit," he says. "The kids have got their stuff down to one backpack, and they're each responsible for their own bag. Mom does the packing; she's quite gifted at that. Puts in just what we need — nothing extra."

Brad and Angelina pace and space their parenting, professional and humanitarian endeavors to ensure they have time for each other.

Brad said, "The kids ask about marriage," he says. "It's meaning more and more to them. So it's something we've got to look at."

Brad Pitt had told Ann Curry on the Today show in December 2008 that he will marry partner Angelina Jolie only if it is important to their kids.