The Casey Anthony Trial, a Cult of Infamy 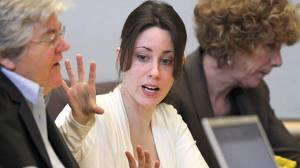 As this delusional thought reveals, Casey Anthony is fully aware of the cult-like celebrity status she has attained. Does she deserve it? Since the disappearance of her young daughter Caylee in 2008 and the discovery of her skeletal remains months later, Anthony's bizarre case has garnered unprecedented media coverage and captivated the public's attention. Charged with first-degree murder, Casey is finally being brought to justice in what is expected to be one of the most high-profile trials of the century. She has pleaded not guilty. The state is seeking the death penalty. While Anthony's tragic story is tailor-made made for the news, it also presents an array of probing legal and social issues.

Despite her proclaimed hatred of the media, Casey has relished in its glare since this real life thriller began. From her defiant stares into the cameras to her courtroom fashion, this young woman's persona elicits passionate reactions from every segment of society. Not once has she shown a public sign of remorse. Anthony knows that the cameras are focused on her, playing to them one day with looks of surprise and crocodile tears the next. Although disgusted by the thought of her alleged crime, we are still obsessed with the show. Casey Anthony has become the personification of evil to many, pity to some and infamy to all. What is she really hiding behind those blank eyes?

The Anthony case is intriguing to millions of people because there are too many perplexing evidentiary questions and too few logical answers. It is not only unfathomable that this attractive mother could have taken her child's life in such a brutal manner, but that the only explanations she has offered are an endless trail of convoluted lies. How could a person be so manipulative? For all of its sensational shock value, the national obsession with this case is understandable. Casey Anthony's notorious version of "celebrity" is not necessarily a bad thing. There is a silver lining to all the frenzy.

Florida's liberal Sunshine Law has provided the media and the public with unfettered access to reams of evidence, dramatic video footage, investigative interviews, depositions and hundreds of Casey's jailhouse letters. Anyone with a curiosity can research and form an opinion about the case, confirming media reports against the available facts.

What is revealed in examining this evidence is the high level of internal dysfunction and emotional discord of Casey Anthony's family. Also striking is the calculating mindset and self-absorbed attitude of a young woman who would stop at nothing to do what she wanted. Casey was too emotionally immature to ever care for her daughter or any other child. These elements are certainly not excuses for murder or even mitigating factors. Yet, the public evidence enlightens us to what may have informed Anthony's disturbing patterns of behavior and possibly led to little Caylee's untimely death.

Critics have made the misguided claim that the Sunshine Law and the media's extensive reporting have actually threatened Casey's right to a fair trial. It has been argued that potential jurors have been exposed to too much information and have formed tainted opinions about the case before an opening statement is even read. Jury selection was even foolishly moved to a different location for this exact reason. Give me a break. Florida's open public records policies have only enhanced Casey Anthony's due process rights. Instead of relying on hearsay, citizens can access and corroborate the same body of evidence that the media is reporting on. This level of transparency has reduced bias and improved the overall objectivity of news on the case. As a result of Florida's Sunshine Law, national networks such as ABC, CBS, NBC, CNN and legal news shows like truTV's In Session and HLN's Nancy Grace, will continue to provide factually comprehensive coverage and analysis of the trial to a broad audience. This is truly a democracy at work. There is no doubt in my mind that Casey will be given her fair shake in a court of law as well as in the court of public opinion.

As Casey Anthony's trial proceeds, the legal challenges for the prosecution, the defense and presiding Judge Belvin Perry remain formidable. Although there is an overwhelming amount of evidence pointing to Casey's guilt, no certain verdict can be predicted yet.

The state alleges that Casey murdered Caylee with a chemical substance, put the body in the trunk of her car and then callously discarded it in a wooded area close to her parent's home. Despite being permitted to introduce novel scientific evidence on body decomposition at trial, the prosecution still doesn't have hard proof of Caylee's actual cause of death. This hole in their case could place reasonable doubt in the minds of jurors, making it extremely difficult to obtain a first-degree murder conviction and the death penalty. Even when presented with the damning evidence of the heart-shaped residue, cadaver dogs, hair samples, air tests and stains indicating the presence of a dead body in the trunk of Casey's car, without a clear cause of death, jurors will be forced to ask themselves some tough questions. Did Casey actually intend to murder her daughter or was it an accident that she tried to cover up? Did she conspire with another person to kill Caylee? Or, is someone else solely responsible for the crime?

Starting off on a wobbly foot, Casey's legal team was defeated in several attempts to block highly incriminating evidence from being admitted at trial. They also failed to prevent Cindy and George Anthony from sitting in on the court proceedings. Lacking any plausible alibi, these pre-trial rulings were a severe blow to the defense's already weak case. At trial, their primary objective will be to prove Casey's innocence. However, if she is convicted and there is a penalty phase, the defense will want to ensure that jurors view their client with sympathy in order to prevent a death sentence.

Casey's attorneys also recognize they have the insurmountable task of explaining why one month elapsed before Caylee's disappearance was revealed and why their client acted as if nothing was wrong during that time. Oddly, it seems as if they are already preparing themselves for a conviction and the penalty phase before the first witness is even called. In a shocking move, the defense recently added Rosalie Bolin, a death penalty mitigation expert and wife of a serial killer to their team. They also hinted during the jury selection process that they may claim as part of their strategy that Casey was emotionally, verbally and sexually abused by members of her family. Conveniently, this alleged abuse was first recalled by Anthony only after the disappearance of her daughter. What could Casey possibly be planning to say if she takes the stand and testifies? It is no wonder Anthony's attorneys wanted to exclude her parents from the courtroom. Making these unsubstantiated claims in an attempt to begin mitigating their client's heinous, alleged crime is a cheap and desperate move by the defense in the 11th hour.

Casey Anthony has already reached the highest level of notoriety in our celebrity driven media culture. Yet, as her trial unfolds, she, her case and most importantly, the innocent Caylee, deserve our continued attention. While seemingly protected in the white, suburban and middle-class environment offered by her grandparents, Caylee Marie Anthony still became another powerless victim of violence. At its extreme, this horrific story reflects that fact that any child can fall fatally through the cracks of families and communities that may look safe on their surface. The truth is, the ugly head of cruelty against children lurks in any corner of our society. The Casey Anthony case is the sign to finally make it stop. It is a cult worth following.
Source
Posted by admin at 8:08 PM