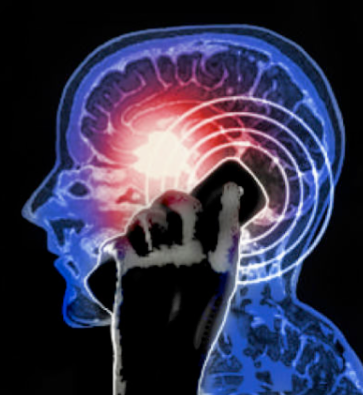 Cell phone cancer. Cellular (cell) phones first became widely available in the United States in the 1990s, but their use has increased dramatically since then. According to the Cellular Telecommunications & Internet Association, there were an estimated 270 million cell phone subscribers in the United States as of December 2008, representing about 87% of the total population.

Based on the large and still growing number of cell phone users (both adults and children), and the fact that cell phones give off radio-frequency (RF) waves, some concerns have been raised about the safety of cell phone use. With respect to cancer, concern focuses on whether cell phones might increase the risk of brain tumors or other tumors in the head and neck area.
How do cell phones work?
Cell phones communicate with nearby cell towers through RF waves, a form of energy located on the electromagnetic spectrum between FM radio waves and microwaves. Like FM radio waves, microwaves, visible light, and heat, they are a form of non-ionizing radiation. They cannot cause cancer by directly damaging DNA. RF waves are different from stronger types of radiation such as x-rays, gamma rays, and ultraviolet (UV) light, which can break the chemical bonds in DNA.
At very high levels, RF waves can heat up body tissues. (This is the basis for how microwave ovens work.) But the levels of energy given off by cell phones are much lower, and the warmth from a cell phone does not damage body tissues.
How are people exposed?
The RF waves from cell phones come from the antenna, which is part of the body of a hand-held phone. The waves are strongest at the antenna and lose energy as they travel away from the phone. The phone is typically held against the side of the head when in use. The closer the antenna is to the head, the greater a person's expected exposure to RF energy.
Many factors can affect the amount of RF energy to which a person is exposed, including:
* The amount of time the person is on the phone
* The model of phone being used: different phones give off different amounts of energy
* Whether or not the person is using a hands-free device
* The distance and path to the nearest cell phone tower: being farther away from the tower requires more energy to get a good signal, as does being inside a building
* The amount of cell phone traffic in the area at the time
Other factors may also affect exposure. For example, older cell phones (analog models) used more energy than newer, digital phones.
The amount of RF energy absorbed from the phone into the user's local tissues is known as the specific absorption rate (SAR). Different cell phones have different SAR levels. Cell phone makers are required to report the SAR level of their product to the Federal Communications Commission (FCC). This information is sometimes listed inside the battery compartment on the phone. The upper limit of SAR allowed in the United States is 1.6 watts per kilogram (W/kg) of body weight.
Posted by admin at 9:56 AM