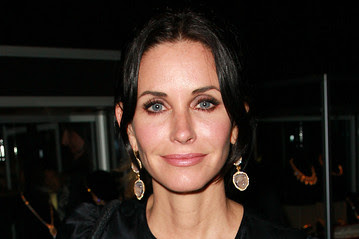 Name Change for ‘Cougar Town’?: Wednesdays on ABC may look a little different if producers of “Cougar Town” have their way. The co-creator of the comedy that follows “Modern Family” is looking to change its name for the second season. Why the possible switcharoo? “Partly as a result of common sense and partly from their research, they find too many instances of testing of people saying they would never watch a show called ‘Cougar Town’ –’I don’t want to see some show about a 40 year old woman nailing younger guys,’” the show’s co-creator Bill Lawrence told Hit Fix. “And then they screen an episode, and people go, ‘Oh, I would watch this show.’” Lawrence says he jokes that the show should be called “Friends and Neighbors.” “Cougar Town” star Courteney Cox was a co-star of the long-running sitcom “Friends.”
Jane Lynch Aids Pets: Jane Lynch is following in the footsteps of fellow “Glee” castmember Lea Michele and coming to the aid of animals through People for the Ethical Treatment of Animals. The “Glee” star is a part of a PETA campaign that urges pet owners to have their animals sprayed or neutered to help control pet populations.
Source
Posted by admin at 8:22 AM