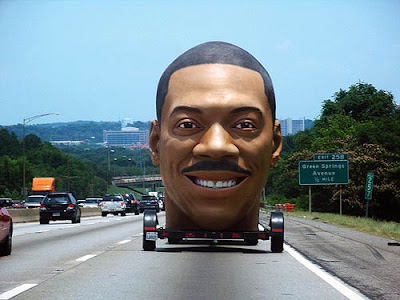 Eddie Murphy was one of the most hysterically funny comedians the world has ever known. His ability to imitate is unparalleled, and seeing his standup meant really getting to see the comedic styling of a host of different people. He was known for the deliberate insensitivity of his jokes towards many different groups (overweight people, gays, etc).

Murphy, like a lot of comedians, got his name out working on SNL in the early 1980’s. He played a grown-up version of Little Rascals’ Buckwheat, as well as Gumby (“I’m Gumby damnit!”). But his standup specials “Raw” and “Delirious” were like golden tablets sent from the heavens. In the specials, Murphy takes it everywhere, keeping it as dirty and hilarious as is physically possible. Most people cry and defecate on themselves the first time they see either one of these videos.

Unfortunately for Murphy, this buzz led to a successful acting career. In the beginning this was just fine — life-changing films such as “Beverly Hills Cop,” “Coming to America” and “Boomerang” actually encouraged and increased his funny — but time was almost up for Murphy’s funny.

Star power began to get to Murphy’s head in the late 90’s and early 2000’s. When the goal becomes to make family comedies in which you play every role, you have probably lost your funny. Sorry Mr. Klump, but the honeymoon is over.