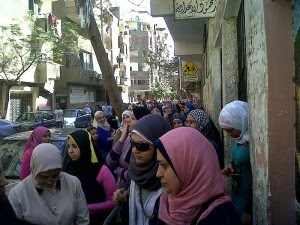 Amnesty International is calling on the authorities in Cairo to investigate.

It says at least 18 female protesters were arrested after army officers cleared Tahrir Square on 9 March.

It says they were then beaten, given electric shocks and strip searched.
The army denies the allegations.
'Utterly unacceptable'

A 20-year-old woman, Salwa Hosseini, told Amnesty she was forced to take off all her clothes by a female prison guard in a room with open doors and a window.
She said that male soldiers looked in and took photographs of her while she was naked.

The demonstrator said a man in a white coat later carried out a 'virginity check' on her and she was threatened with prostitution charges.

"Forcing women to have 'virginity tests' is utterly unacceptable. Its purpose is to degrade women because they are women," a spokesperson for Amnesty International said in a statement.

"Women and girls must be able to express their views on the future of Egypt without being detained, tortured, or subjected to profoundly degrading and discriminatory treatment."

Egypt's military has been criticised by activists for detaining people involved in the mass protests and abusing them.

Last week, the head of the military police told an Egyptian newspaper that video footage had been fabricated by individuals wanting to create divisions between the people and the armed forces.

Human rights groups have also criticised Egypt's new rulers for continuing to put civilians on trial before military courts. They say these have a track record of unfair trials and severely restrict the right to appeal.

Reporting on the military in Egypt is difficult. A law passed in 1956 prevents writing about the army.

Source:BBC
Posted by admin at 3:08 PM