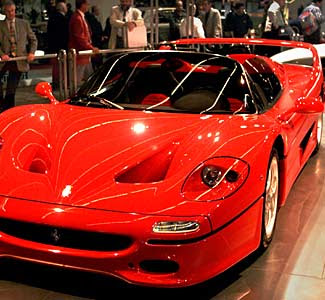 FBI sued over $750k car. Gets FBI Sued.The FBI has destroyed a $750,000 Ferrari and they don't want to pay for it.You're probably picturing a heated chase, gunfire and a crash that ends with the Ferrari thief caught and cuffed in the back of an unmarked vehicle.
Eh, no. It's more like an agent and an Assistant U.S. Attorney went for a joyride claiming it was "official business."
Official business or not, the insurance company that owns the totaled vehicle has decided to sue the FBI, and they want all their money back.
The FBI Ferrari saga begins in late 2003, in the great state of Pennsylvania. A Ferrari dealership reported the car stolen and submitted a claim to the insurance company. They paid up and took ownership of the stolen car.
In 2008, the Ferrari was confiscated in Kentucky and moved to a warehouse for holding until the thief was prosecuted, reports The Detroit News. Then came the crash.

The insurance company filed a claim for $750,000 with the department, which the agency repeatedly rejected, notes the paper. It claimed that the crash occurred during official holding, making them immune to suit.
Well, the insurance company being typically pesky, filed a FOIA request asking for documents about the crash. According to the paper, they received one document and one document only:
An e-mail from a U.S. Attorney stating that he took the FBI Ferrari on a "short ride" with a Special Agent who lost control and crashed.
This information is vital to the insurance company now that it has decided to sue the FBI.
Posted by admin at 10:04 AM