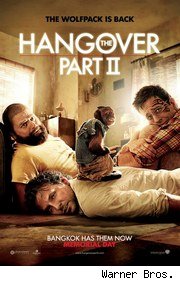 The dudes-in-distress sequel scored the largest opening ever for an R-rated comedy, and it dominates first place over other two sequels also raking in big bucks right now. In second place: Jack Black and Angelina Jolie's 'Kung Fu Panda 2,' predicted to make $62 million for the four-day holiday period in its premiere weekend in theaters.

Johnny Depp's 'Pirates of the Caribbean: On Stranger Tides,' which opened a week ago, is estimated to make another $53 million this Memorial Day weekend, followed by Kristen Wiig's 'Bridesmaids,' expected to earn another $21.5 million.

The Wolf Pack, and 'Hangover 2' director Todd Phillips, must be cheering the news, and now, the wildly profitable opening has fans wondering if a 'Hangover 3' is in store. The guys have already made a mess of their lives in Vegas and Bangkok. What's next?


Justin Bartha votes for an Amsterdam sequel, as reported by Moviefone, while Ken Jeong says he's on board for wherever the team needs him. "I would absolutely do a third one," he said at the Billboard Music Awards, which he hosted earlier this month. "All of my fame and success in the last few years is directly due to 'The Hangover.' Those guys are like family to me, so it doesn't matter, big part or small part... Well, I guess I know a thing or two about small parts."

Of course, what would a 'Hangover' discussion be without some nude-dude jokes?

Here, 'Hangover 2' stars sit down to discuss the secrets of growing facial hair, making the best guacamole, and just what Jeong is packing below the waist.
Posted by admin at 1:57 PM