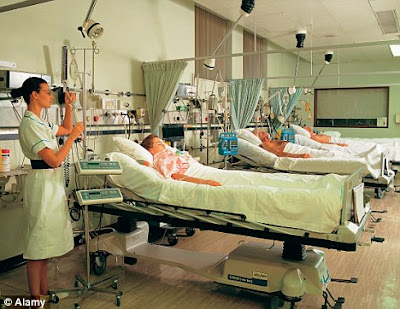 Hospital deaths weekends. People admitted to the hospital on the weekend are 10 percent more likely to die than those who checked in during the week, according to a new analysis of nearly 30 million people.Even if 10 percent doesn't sound like much of a difference, when applied to the entire U.S. population it equals an additional tens of thousands of people each year, study author Dr. Rocco Ricciardi of Tufts University Medical School told Reuters Health.

"In other words, an extra 20 to 25 thousand people die each year in the United States because of admission on a weekend," he said.

This is not the first study to uncover a "weekend effect," in which patients are likely to fare worse during the weekends. Previous research has shown a "weekend effect" for patients admitted to the hospital for heart attack, a blood clot in a lung, a ruptured abdominal artery and strokes of all kinds.

Still, the data are not always consistent: earlier this year, a survey of Pennsylvania hospitals found that people with injuries fare slightly better on weekends.

The current study is based on an analysis of a national sample of close to 30 million people who were admitted to hospitals in 35 states over a 5-year period. All were admitted for "non-elective" reasons, which represents most admissions, Ricciardi noted.

Reporting in the Archives of Surgery, he and his colleagues found that 2.7 percent of the people admitted during the weekend died while in the hospital, which happened to only 2.3 percent of those admitted on a weekday.

It's not entirely clear why people might fare worse when they come in during the weekend, Ricciardi said in an email. Looking specifically at traumas, he and his colleagues found no differences in death rates between weekend and weekday arrivals, which helps eliminate the possibility that people experience more life-threatening accidents on weekends.

But it's possible that care is different on weekends, he said - perhaps there is less nursing, fewer well-trained doctors, or less access to imaging and other necessary tools.

"Either (1) the patients coming to the hospital on weekends are sicker or else (2) the hospital is doing a worse job of treating them," said Dr. Raman Khanna at the University of California at San Francisco, who was not involved in the study.

Since the researchers found no differences in trauma rates, and also took into account whether weekend arrivers had other illnesses that could make them sicker, "the authors can make the case that number 2 is more likely," he told Reuters Health in an email.

Ricciardi and his team also looked at death rates by admission day for different diagnoses, and saw that not all fared worse on the weekends. This is likely because some categories - such as trauma - have specific steps that are followed each time, said Ricciardi. "Thus services are the same whether it is nighttime, daytime, or weekend or weekday."
Posted by admin at 9:57 AM