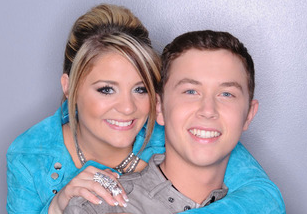 'American Idol' winner crowned. Tonight is the night we’ve been waiting for and looking forward to all season. American Idol season 10 is over and we will very shortly have our 10th Idol! The two finalists, Lauren Alaina and Scotty McCreery are both the sweetest, most genuine teens who both deserve the title. This is a tough one!
I will note that as soon as Lauren sang in her audition with Steven Tyler, I said she will win. She’s almost there. I also said that Hines Ward would with Dancing With The Stars as soon as the stars were announced…. and he did last night!

There is an amazing lineup of performances tonight before the final results are given. You can check out the list here.

Who do you think is going to take home the title? Who’d you vote for?

UPDATE: Well, I was wrong! And I must say that after watching Scotty perform with Tim McGraw, I am proud to annouce that he is THE AMERICAN IDOL!!!!
Posted by admin at 7:23 AM