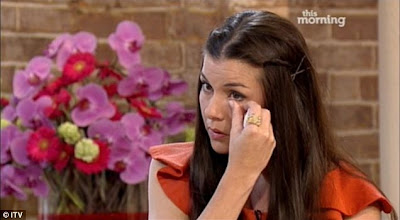 Imogen Thomas 'calls police over Twitter threats'. IMOGEN Thomas has called in the police after death threats from Manchester United fanatics.
Imogen Thomas has been showered with abuse since Ryan Giggs was named as the footballer who took out an injunction to hide a six-month fling with her.


They blame her for the furore and fear it is distracting the team in the build-up to Saturday’s Champions League final against Barcelona.


She lives in London and is terrified the extremist fans, modelling themselves on Italian hooligans known as Ultras, will find her when they travel down for the Wembley clash.


Police sources believe the mob are a gang of fanatics calling themselves the Continuity Manchester Education Committee – or Men In Black. Former Big Brother star Imogen, 28, fears she is now in their firing line.


One of her close pals added: “She’s been getting very nasty threats.


“She’s terrified. She doesn’t want to leave the house because she worries what these people may do to her if they get their hands on her.


“She’s convinced they will kill her if they get the chance.’’


United supporters have vented their rage at her through Twitter. As our image above shows, she has been receiving personal abuse.


She also wrote: “Don’t wanna get out of bed today! Actually I may not!’’ Message boards on supporter site RedCafe.net are littered with praise for the masked yobs’ attack on reporters.


One chilling post read: “Shame they didn’t torch them.’’


The Ultras have struck before. Last year 30 men in balaclavas turned up at Wayne Rooney’s home when he wanted to leave the club. He pledged his loyalty to United soon after.


Rio Ferdinand, 32, was also targeted in similar circumstances in 2005.


A United source said: “These are the hardest core of supporters. They want Giggsy fully focused on the game and they’re prepared to act.”


The threats are the main reason Imogen wants the injunction covering her relationship with Giggs lifted so she can tell her side of the story.


He can only be named because Lib Dem MP John Hemming used parliamentary privilege to identify Giggs in the House Of Commons.
Posted by admin at 7:32 AM