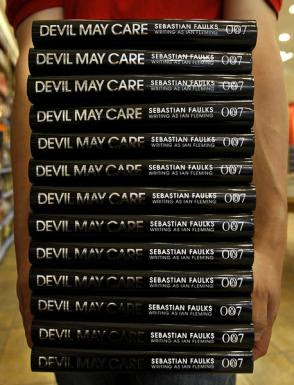 James Bond returns in new novel. The promotion of American crime writer Jeffery Deaver's book about 007 and his latest escapades, which hits shelves on Thursday, was more like Hollywood than the usually more low-key world of publishing.
But Bond is still a potential money spinner in book form as well as on the big screen, explaining the high-profile event at London's refurbished, vaulted St. Pancras train station and its swanky champagne bar, billed as the longest in Europe.

Deaver, best known for his Kathryn Dance and Lincoln Rhyme books, arrived at the bar in a modern Bentley.

He was led in by stunt rider and model Chesca Miles, who appeared as a Bond girl on a motorbike riding a vintage BSA, and was handed a copy of the new book by a member of the Royal Marine Commando display team who had abseiled from the roof.

Deaver has said all along that he had the "chameleon"-like qualities needed to get into the mind of a quintessentially English character, although plenty of research did help.

"I became a Brit for about the eight months it took me to write the book," he told Reuters at the launch. "I did have to learn, for instance, that when we say 'pissed' over here (in Britain) it means drunk, it doesn't mean angry."

Deaver believed his previous novels had plenty in common with a good Bond story by the character's creator Ian Fleming, but that Carte Blanche did present an extra challenge.

"I know what my fans want, the millions of Jeffery Deaver fans around the world," he said.

"They want a book that is essentially a roller coaster, moves very quickly, lots of twists and turns, big surprise ending. Well, that's what Carte Blanche is going to be.

"But I had the extra question -- what do Ian Fleming fans want? So I went back and for six, seven months, researched everything that Fleming had written.

"I of course re-read all the James Bond novels and I think I had a very good sense of how to bring his character into my story."

British publisher Hodder & Stoughton was keen to keep the story under wraps before publication on Thursday. Carte Blanche is set in the present day, and partly in Serbia and Dubai.

"For my readers I think there's an immediacy to books set in the present day," the author explained. "I want a book to be the most intense emotional experience it can be.

"If you go back to a period piece we don't really get the sweaty palms, we don't sit on the edge of our seats quite so much as if what Bond is solving today could be a problem, a terror, a threat that we all face every day."

But he added that the immediacy did not mean he tried to convey any political point of view about real-life events.

"In Carte Blanche we certainly do touch on real life events to some extent, but Ernest Hemingway once said if you want to send a message go to Western Union, don't put it in your novel."

Deaver was first identified as a potential Bond author when he won the 2004 Crime Writers' Association Ian Fleming Steel Dagger Award for "Garden of Beasts" and spoke at the ceremony of his indebtedness to Fleming and Bond.

More than 100 million Bond books have been sold in total.
Posted by admin at 7:04 AM