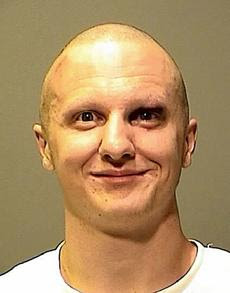 Judge rules on Jared Loughner's compentency. The man accused of killing six people and injuring a US congresswoman in a January shooting rampage in Arizona has been found incompetent to stand trial.
The ruling by US District Judge Larry Burns puts Jared Loughner's prosecution on hold indefinitely.

He will be sent to a federal facility in an effort to restore his competency.

Six died and 13 were injured in the shooting, including Representative Gabrielle Giffords. Mr Loughner, 21, has pleaded not guilty to the attack.

At the hearing into Mr Loughner's mental competency in Tucson, Arizona on Wednesday, he was removed from the federal court following an outburst.

The defendent lowered his head, loudly mumbling what sounded like "thank you for the freak show. She died in front of me," and was taken away by US marshals, the Associated Press reported.

Judge Larry Burns later allowed Mr Loughner to watch proceedings on a television in another room, then handed down his ruling.

Before Wednesday's hearing, Mr Loughner had spent five weeks in March and April undergoing a mental evaluation by court-appointed experts, and Mr Burns based his ruling on the undisclosed report.

Mr Loughner, who was rejected by the US military and suspended from college over concerns for his mental health, has been held since the 8 January attack on Ms Giffords' constituency event at a store in Tucson, Arizona.

He is charged with 49 federal counts in connection with the attack.

Ms Giffords, who was shot in the head, has made what doctors have called a remarkable recovery, but she has yet to appear in public.

Mr Loughner will now be sent for a maximum of four months to a facility where doctors will attempt to treat him.

If he is later deemed competent, the trial will proceed, and if not his detention at the mental health facility can again be extended.

If doctors say they are unable to restore Mr Loughner's competency and a judge rules he cannot be tried, authorities can still petition to have him held.
Posted by admin at 7:07 AM