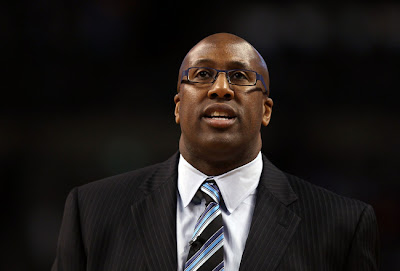 The Lakers hire new head coach. The Lakers were expected to announce Brown as the 22nd coach in franchise history Wednesday afternoon but first issued a statement.
"In response to rampant speculation and reports about our head coaching position and Mike Brown, we've met with Mike and are very impressed with him," the team said. "In addition, we have an outline for an agreement in place and hope to sign a contract within the next few days."

Brown, who is currently in Cleveland, will sign the contract later this week. According to league sources, the deal will be for four years and $18.25 million.

During an interview on ESPN during halftime of Game 5 of the Western Conference finals, Brown said he already had exchanged text messages with Kobe Bryant, who had endorsed Jackson assistant coach Brian Shaw for the job.

Brown is "looking forward to getting to know Kobe and being able to work with him to go and get us a championship," he said.

The development is a victorious comeback for Brown, who was fired by the Cleveland Cavaliers almost a year ago to the day. Now, the 41-year-old Brown, the winningest coach in Cavaliers history, is leading one of the most prestigious and successful franchise in modern basketball history.

The contract is a three-year deal with a team option for a fourth year. If the Lakers don't pick up the option, Brown is guaranteed to receive $2.5 million.

Brown's union with the Lakers came together quickly. An ESPN analyst and the 2008-09 NBA coach of the year, he emerged as the leading candidate for the vacancy created when Phil Jackson retired after a strong face-to-face interview Saturday with Lakers brass including executive vice president of player personnel Jim Buss, ESPN The Magazine's Ric Bucher reported.
Posted by admin at 7:21 AM