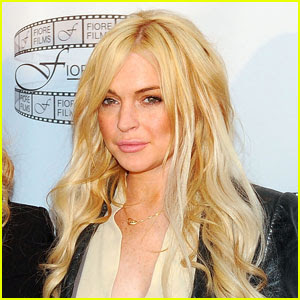 Lohan house arrest. Last month, was ordered to undertake three years probation, serve 120 days in jail and complete 480 hours of community service after taking a necklace from an upmarket boutique and breaching the terms of her 2007 probation - turned herself into Los Angeles' Lynwood Jail earlier this morning (26.05.11) and it was immediately determined she was eligible to serve her time at home so was fitted with an electronic ankle bracelet and released.
She is now at her house in Venice, California, but cannot leave until June 29.

Los Angeles Sheriff's spokesman Steve Whitmore said: "She is now confined to the interior premises of her home at all times."

The home detention service aims to reduce the prison population by allowing non-violent offenders to serve out their sentences in home confinement.

The 'Mean Girls' star - who pleaded no contest to stealing the $2,500 necklace - had until June 17 to report to the prison but it is thought she wanted to do it sooner rather than later so she can begin shooting new movie, 'Gotti: three Generations'.

A source said: "Lindsay wanted to get it over with so it doesn't impact her 'Gotti' role."

In addition to her house arrest, Lindsay, 24, must perform 480 hours of community service at a downtown Los Angeles women's shelter and undertake janitorial work at the county morgue.
Posted by admin at 7:25 AM