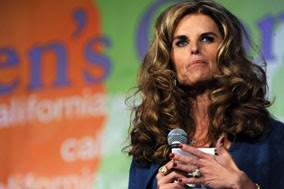 Maria Shriver leaked Schwarzenegger scandal? There are more revelations in the Arnold Schwarzenegger love child scandal today - according to US reports, it was Maria Shriver's people who leaked the story to the press.
TMZ claims Shriver was "hysterical" when she found out about Arnie's love child with housekeeper Mildred Baena and wanted to hold a press conferenceto announce the news.

Her people eventually managed to talk her out of it but later leaked the story to the LA Times and TMZ.

And while Arnie got there first and spoke out about the scandal, it seems he wasn't telling the whole truth.

TMZ also reports that Maria did not find out about the baby until late April or early May... Arnie claims he came clean in January.
Posted by admin at 7:56 AM