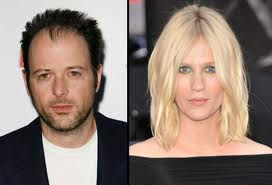 matthew vaughn denies january jones. After the better part of four weeks of blind items and rumours about paternity that seemed to lead to him, Matthew Vaughn has finally spoken out to deny that he and January Jones had an affair that resulted in a love child. It had been strongly suggested, after no less than half-a-dozen other married dudes were named first, that Jones slept with one of the production people on the set of X-Men: First Class.A blind item followed which claimed a foreign-born married man was the baby’s father, which seemed to narrow that list down. Yesterday, E! Online claimed outright that in all likelihood, Vaughn had an affair and fathered a love child about whom he was hoping no one would find out. ‘Off the record, several sources from January’s new film, X-Men: First Class, directed by Claudia Schiffer’s British husband, Matthew Vaughn, say odd happenings occurred on the set, including a ‘very close’ relationship with Jones,’ claimed the website in a story that’s now been pulled, ‘According to multiple knowledgeable X-Men sources, Vaughn and Schiffer, who were renting a house on Foothill Road in Beverly Hills, ‘abruptly’ left town at roughly the same time Jones made her surprise baby announcement in April, even though the couple was tentatively scheduled to stay on through May.’ Vaughn promptly explained away the move, and I don’t think that’s a big deal. Soon after, E! updated to say Vaughn’s lawyer awoke from their nap and began KANYE CAPPING an angry rebuttal, ‘Legal counsel for Matthew Vaughn strongly denies that his client had an affair with January Jones, or is the father of her expected child.’ Soon after that update was added, the entire story was pulled from E!’s website. I don’t know. I’m more amused at this point by just how many penises Jones has been playing hide and seek with. Even co-star Kevin Bacon had to move swiftly on when asked about paternity during the film’s screening. ‘You know you can’t ask me that,’ he said.