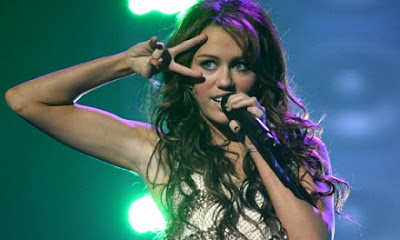 She has long shed her Disney princess image and now another scandal has come haunting Miley Cyrus.A series of topless pictures taken by her while she was getting a tattoo on her rib cage have leaked online, reported People magazine.Sprawled out on a blanket with only a draped shirt covering her modesty, the eighteen-year-old starlet proved once again that she has left her child star days behind her. The pictures were taken when the ‘Party in the USA’ hitmaker got her fifth tattoo, a dream catcher, supposed to represent her siblings.This seductive photo was leaked shortly after racy pictures from her concert in Brazil hit the web that showed Miley in a barely-there leather get up.The singer meanwhile has got her sixth tattoo, dedicated to Brazil. It is so far unclear what her new tattoo is, but it joins Miley’s already vast collection of symbols and words. Her first tattoo, the words ‘Just Breathe’ on the left side of her chest, caused controversy as Miley was under age when it was done. US law prohibits tattoos on those under 18, but when the 17-year-old star wanted to get the tattoo aged 17 in 2009 her parents signed a consent form.Other inkings soon followed. Miley has an outline of a love heart on her pinky and a cross on the inside of her ring finger, both on her right hand. The singer also has the word ‘LOVE’ on the inside of her ear, as well as a dream catcher on the right side of her ribcage
Posted by admin at 8:26 AM