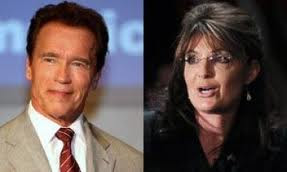 Schwarzenegger's affair and she's saying things that almost everyone else feels. News that Arnold strayed from his marriage on several occasions and fathered at least one love child has people sick to their stomachs and shaking their heads at the former governor of California.

"I feel so bad for his children. It must be quite embarrassing for them....You know, it's an irresponsible and, really, a pretty disgusting thing that he did, pretty much denying that he had a child for ten years. That's how I look at it. It speaks to his character. It's sad," Palin said. Palin is absolutely right in calling the affairs embarrassing and disgusting. He has not only hurt his wife and kids, but also the child that he fathered with his former housekeeper. It is a huge mess that may even get uglier before it disappears from the news. He could have more children, there could be more women, and more celebrities and politicians are going to voicing their opinions on this disgraceful news.