Peace effort worse off than before? 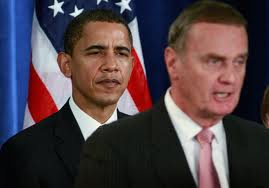 Peace effort worse off than before.President Barack Obama is trying to shock the moribund Israeli-Palestinian peace process to life, but there is little chance the patient can be resuscitated anytime soon.

The two sides are more dug in, further apart and less trustful of each other than at any point since Obama brought Israeli Prime Minister Benjamin Netanyahu and Palestinian President Mahmoud Abbas together at the White House last September with the goal of reaching a framework deal within a year.

That deadline can't be met now. The architect of the diplomacy that was to make it happen, former Sen. George Mitchell, resigned last week. And Obama has now angered and alienated Israel by endorsing a key Palestinian demand, while at the same time deriding Palestinian attempts to win U.N. recognition for an independent state before a negotiated settlement.

In addition, in his speech Thursday and his comments alongside Netanyahu on Friday, Obama offered no specific ideas on how to relaunch the stalled peace talks, and he ignored many of the most divisive issues separating the two sides. Those include the status of Jerusalem that both claim as a capital and the fate of Palestinian refugees. He also offered no prescription for dealing with a power-sharing agreement between Abbas and the militant group Hamas. Israel has said it will not negotiate with a Palestinian government that includes Hamas.

If Democrat Kathy Hochul wins next Tuesday’s special election in a New York’s 26th Congressional District, a district that has been Republican for years, will it be a harbinger of Republicans losing the House majority in 2012?

Obama and Netanyahu kept it positive in public remarks after their meeting Friday, repeating that the U.S.-Israeli alliance is unbreakable and that America remains steadfast in support of Israel's defense.
Story: 'We can't go back': Israeli PM rejects 1967 border proposal

Yet there was no disguising the fundamental issues that divide them and have driven their relationship since almost the moment they both took office in 2009. Aside from presenting a united front in expressing platitudes about the ultimate goal of peace, there was little common ground on how to get there.

"Obviously there are some differences between us in the precise formulations and language," Obama said.

Netanyahu, meanwhile, politely trashed elements of Obama's stand as unrealistic. "A peace based on illusions will crash eventually on the rocks of Middle Eastern reality," he said, and declared that "the only peace that will endure is one that is based on reality, on unshakeable facts."
Video: Obama tries to ease tensions with Israel PM (on this page)

Palestinian President Abbas, meanwhile, has not given his official response to parameters for the Mideast peace deal that Obama laid out in his speech on Thursday.

Since then, Abbas has been consulting by phone with Arab leaders. He was planning to meet with Jordan's King Abdullah II on Saturday and then convene the leaders of the PLO and his Fatah movement later in the week before giving a response, Abbas aide Saeb Erekat said.

Erekat said late Friday that Netanyahu's statements make it clear the Israeli leader is not a partner for peace, suggesting there is no point in returning to negotiations.

"I don't think we can talk about a peace process with a man who says the 1967 lines are an illusion, that Jerusalem will be the capital of Israel, undivided, and he does not want a single (Palestinian) refugee to go back," Erekat said. "What is left to negotiate about?"

Tensions over settlements
Tensions between the two have been most evident over Jewish settlements in the West Bank and East Jerusalem, which the administration opposes but Netanyahu refuses to halt. An announcement of new settlement construction last year while Vice President Joe Biden was visiting Jerusalem plunged ties to what was then a new low.

Since then, attempts to repair relations have faltered, with Mitchell, the special envoy, unable to secure a settlement freeze from the Israelis or a commitment from the Palestinians to resume negotiations without one. A frustrated Mitchell quit last week.

Obama's declaration Thursday that the borders of a future Palestinian state should be based on 1967 borders — the lines that existed before that year's Six Day War in which Israel occupied the West Bank, Gaza and East Jerusalem — stunned Netanyahu, who insists that the starting point for eventual borders must be negotiated.

Even though Obama made clear that the solution would have to involve territorial swaps agreed to by both sides, his statement removed the subtlety from what had been a vague U.S. position in support of the Palestinians' "goal" on borders and gave it his imprimatur.
Video: Obama, Netanyahu reach 'bottom of disagreement' (on this page)

Netanyahu, informed shortly before Obama's speech of its contents by Secretary of State Hillary Rodham Clinton, sought in vain to keep border language out, U.S. officials said. Netanyahu was incensed, they said.

Netanyahu called the 1967 borders "indefensible" and said he expected Obama to reaffirm support for commitments made by President George W. Bush that demographic realities — meaning the growth of Jewish settlements in the West Bank — would not allow a return to the 1967 borders. An aide told reporters accompanying Netanyahu to Washington that Obama did not appear to understand the situation in the Middle East.

The administration's relationship with the Palestinians has also been awkward.

While Obama did endorse the Palestinians' position on borders, he has been frustrated by their refusal to resume talks, irritated by their intense lobbying for the United Nations to recognize a state and concerned by Hamas, which the U.S. and Israel regard as a terrorist group.

In fact, U.S. officials said his endorsement of the 1967 borders was intended to blunt the Palestinian drive at the U.N.
Interactive: Israel's border (on this page)

Yet, his comments rejecting the U.N. bid as essentially a waste of time and stressing the need for the Palestinians to address serious Israeli opposition to Hamas may have given the Palestinians new reasons for intransigence and could embolden them to take harder line positions.

A senior Palestinian official said Saturday that Palestinians will seek recognition as a United Nations member-state in September given the deadlock in U.S.-brokered peacemaking with Israel.

Another Palestinian official, Nabil Abu Rdainah, said the drive to win statehood status unilaterally could be forestalled should Israel accept the demand to extend a freeze on its settlement of the West Bank so that negotiations can resume.
Source:www.msnbc.msn.com
Posted by admin at 2:21 PM

Email ThisBlogThis!Share to TwitterShare to FacebookShare to Pinterest
Labels: breaking news, Peace effort, than before, worse off