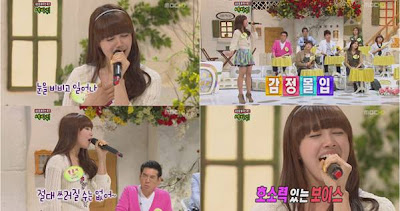 On May 28th, A Pink’s main vocalist Jung Eunji guested on MBC’s “Quiz That Changes the World” and wowed viewers with a stunning cover of Maya’s “Shouting.”

Originally from Busan, panelists immediately noticed her Busan accent. Coincidentally, Simon D, the representative celebrity for the Busan dialect, was also guesting on the show.


When asked whether she had met him previously, she copied Simon D’s tone of voice by replying, “I met him on a broadcast program once, and he asked me where I was from immediately. I said somewhere from Busan and he called me cute.”

Simon D smugly stated, “I do represent the Busan dialect. Everyone copies me since they know what will make them succeed.“ Eunji quickly retorted, “I didn’t copy, I just always use Busan’s dialect.”

One of the panelists jokingly remarked, “Busan kids are always bickering with each other!”

Check out her performance below!

source: allkpop
Posted by admin at 1:56 AM