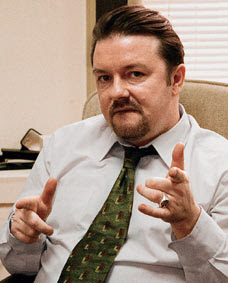 Ricky Gervais Office Finale. Ricky Gervais, creator and star of the British version of "The Office," admits he doesn't think of the U.S. edition of the workplace comedy as "art."

The award-winning actor and writer, who also wrote and starred in the show-business satire "Extras," was blasted by some critics earlier this year for mercilessly teasing celebrities at the Golden Globes ceremony in Los Angeles.

He took to his blog to weigh in on Thursday night's Season 7 finale of the U.S. version of "The Office," in which he, Will Arnett, Ray Romano, Jim Carrey, James Spader and Warren Buffett made cameos.

"Watching 'The Office' finale may remind some of the Chris Martin episode of 'Extras,'" Gervais wrote on his blog, referring to how the Coldplay front-man made an unlikely cameo as himself on a factory-set sitcom in the "Extras" show-within-a-show "When the Whistle Blows." "If you're going to jump a shark, jump a big one," Gervais added. "Still we've had good innings. Ha ha. I assume most people know I didn't do the U.S. remake for the art. I did my version for the art. That's why I stopped it after a few hours of telly. Don't get me wrong. I'm very proud of the U.S. version. It was not only a very, very good network comedy but it was also a massive success story. But you know, I did it for different reasons, ambitions and with slightly different emotional attachments to the project. And once and for all... I would never ever in a million years take a permanent role in the show as an actor. It really would be [expletive] mental. You don't start a company to work on reception. Can't wait to start work on the Chinese version. Bill Gates is in that one. Anyway, as you may know there's been 10 years of 'The Office' in some form or another. Happy Birthday."

Steve Carell, who played the boss in the U.S. version of "The Office," left last month after seven seasons, prompting fans to speculate about who might replace him. Many viewers have suggested Gervais should reprise his role from the original version of the show in the Americanized "Office."
Posted by admin at 9:47 AM