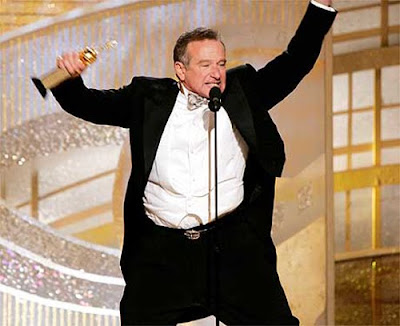 It’s still debatable whether Williams ever had funny, but assume that at one point his hyperkinetic, wild facial expression and vocal range silliness was absolutely hilarious. Perhaps best known for voicing the genie in “Aladdin,” Williams is known for his incredible versatility as an actor — versatility that eventually destroyed his funny.

Williams gained fame on the show “Mork and Mindy” in the late 70’s and early 80’s. In the show, he played Mork, a nasal-voiced alien that was involved in various hijinks, sometimes including the cast of “Happy Days” (Mork and Mindy was a spin-off). Williams used this TV fame to kick-start his standup career, appearing in three TV specials during the 70’s and 80’s.

Williams’ acting career took off during the 90’s, when he starred in classics such as “Jumanji,” “Mrs. Doubtfire,” and “Hook.” All were not only hilarious, but also charming and even action-packed. Williams seemed invincible. And then 1997 hit, and Williams’ career changed forever. He won a Best Supporting Actor Academy Award for his role in the vastly overrated “Good Will Hunting.”

It almost seems as if Williams took the praise to his head, and decided to commit funny suicide. The following years would see Williams star in several movies that absolutely destroy funny — his own and even the viewers. “Patch Adams,” “What Dreams May Come,” and “One Hour Photo” are all examples of these. Robin Williams became a scary, nasty man, and his funny plummeted. Recently Williams has tried to make a comeback on the standup circuit, but his routine remains shadowed by his melodramatic, scary movie personas.