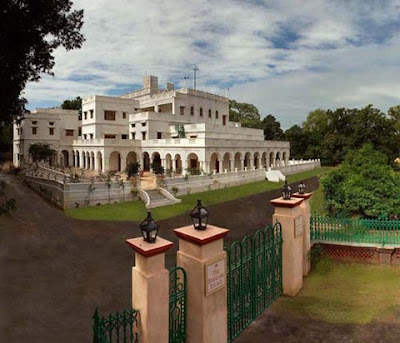 A member of production team told Sawfnews.com that the two stars drove to Patiala by car from Chandigarh airport; Kareena arrived on Thursday, May 26, and Salman a day later.

Salman and Kareena are staying and shooting at Neemrana hotel Baradari Palace.

Opened four years ago, the heritage-hotel is housed in a 19th century palace of Patiala Maharaja Rajinder Singh. The building known as Baradari Kothi was built in 1876. Baradari is an open pavilion with 12 arches.

In Bodyguard Baradari Palace is shown to be Kareena's house.

The hotel's manager tells Sawfnews.com that the filmmakers have exclusively booked the hotel from May 25 to June 23. A notice on the hotel's gate says it will remain closed to public until then.

The hotel had earlier hosted the Deols during the filming of Yamla Pagla Deewana - the sprawling house where Anupam Kher is shown as living with his extended clan.

The hotel with 11 suites and 6 rooms has been placed under tight security by its management, even though Salman is traveling with his own security detail from Mumbai.

Production team member arrived in the city well ahead of the stars to overlook the arrangements.

Other cast members joining the Patiala schedule include Raj Babbar and Hazel. Shatrughan Sinha is not part of this schedule, said the production member.

The three digit temperatures of Patiala are not beckoning enough for Salman to enjoy the sprawling gardens of the palace.

"Salman has been in his room which has been cordoned off by his security men since the time he arrived in the city," the hotel manager told us.

"We have not yet received any special requests from either Salman or Kareena but Salman did inquired about workout facilities in the hotel."

While Kareena plans to stay in Patiala through the entire duration of the shoot, Salman will be in and out of the city since Ready is releasing on June 3.