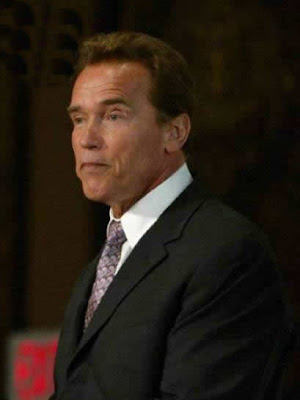 Schwarzenegger to face criminal inquiry. After reports circulated that Sacramento Hyatt Regency security officer William Taylor used to witness former Governor Arnold Schwarzenegger using CHP officers and vehicles to bring multiple 'scantily-clad' women in and out of his suite at the hotel, the California Attorney General will be conducting a preliminary evaluation, or an "inquiry" into his behavior during that time, so they can determine how much money he was misusing to cover up his affairs!
As Taylor has explained:

“It makes me very angry just to think of what was going on at that time. On three differed occasions after the governor arrived alone at the Hyatt Regency, CHP Dignitary Protection Services arrived in their official vehicles, black Ford Crown Victoria sedans - about one to two hours later with one or two young females. They'd hurriedly escort the women through the service entrance on the second floor parking garage to the elevator that went to the governor's private wing… the women would usually stay for two to four hours and either leave through the hotel's main entrance or be driven away by the CHP in the same official vehicles."

Unbelievable. This guy really has a lot of nerve, given the current deficit in this state!

Actions have consequences, and we think Arnold is going to be learning this lesson the hardest way possible!
Posted by admin at 7:19 AM