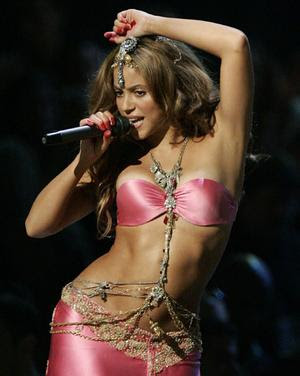 Pop superstar Shakira was leading the cheers as her soccer star boyfriendGerard Pique helped Spain's FC Barcelona to victory in the Champions League final in London on Saturday (28May11).

The Hips Don't Lie hitmaker began dating the sports star shortly after announcing her split from longtime partner, Antonio de la Rua, in January(11) and she is often spotted supporting him at games.

Pique took to the pitch at London's Wembley Stadium on Saturday as his team took on Britain's Manchester United in the final of Europe's Champions League - and Shakira shared her excitement with fans as Barcelona thrashed their opponents 3-1.

In a post on Twitter.com, she writes, "Champions! Long live Barca! And now get ready, the big celebration is coming!" Pique later revealed the team will celebrate the victory by attending Shakira's concert in Barcelona on Sunday (29May11).

Other stars who attended the game included veteran crooner Neil Diamond, who posted a picture on Twitter which showed him at Wembley wearing a Manchester United hat and scarf.

But Diamond wasn't too disappointed when his team lost, writing, "What a match! Champions League Final at Wembley... Congratulations Barcelona. Great try Manchester!" Dedicated sports fan Russell Crowe was also following the game and 'Tweeting' throughout the action.

He concluded his Twitter coverage by writing, "Barcelona! Never in doubt. Bad luck Man U, did great to get to the final".
Posted by admin at 1:19 AM