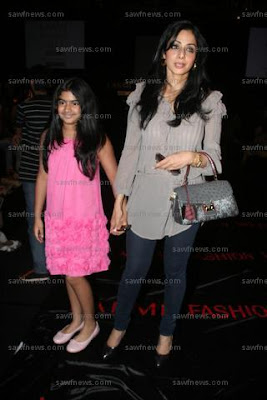 Sridevi will return to the silver screen, after a 14 year hiatus to raise her family, with the film 'English Vinglish,' to be directed by Gauri Shinde, wife of R Balki.

Sridevi was earlier expected to make her Bollywood comeback with Mr India 2, but the film has yet to take off.

Sridevi credits the script of English Vinglish and its director for motivating her comeback after "spending time at home, raising my children."

"When I heard the script, I fell in love with it. I hope it turns out well," she says.

"We've already started working on costumes and the look -- we've selected the sarees," she added.

Sridevi, who will be working with a woman director for the first time in her career, is upbeat about the prospect.

"I've never worked with a woman director before. When I met her [Gauri] there was so much positive energy between us."

In the past, Sridevi has worked in Tamil, Telugu, Malayalam and Hindi films.

The last time she faced the camera was for the Hindi film Judaii (1997). Thereafter, she took time off to raise her children.

"I loved spending time at home, raising my children," she says. "Besides, being a producer's wife, how can I ever be away from the industry? I never felt disconnected."

Sridevi has so far won four Filmfare Awards, two for Hindi film, and one each for Telugu and Tamil films.