Brian Stann vs. Jorge Santiago official for UFC 130 in May 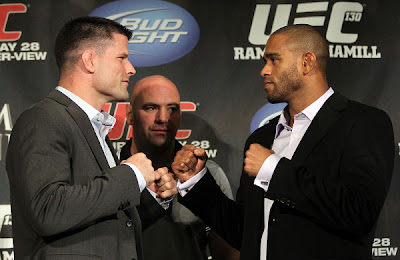 UFC officials today announced the matchup, which was previously reported by MMAjunkie.com (www.mmajunkie.com).

Stann initially was slated to Wanderlei Silva (33-10-1 MMA 3-5 UFC) at the May 28 event, but "The Axe Murderer" repeatedly voiced his preference not to fight the fan favorite and military hero.

Featuring a lightweight title fight between current champion Frankie Edgar and top contender Gray Maynard, UFC 130 takes place May 28 at the MGM Grand Garden Arena in Las Vegas. The night's main card, including the Santiago vs. Stann bout, airs on pay-per-view.
U.S. fans likely best remember Santiago for a three-fight stint under the UFC banner in 2006. The Brazilian defeated Justin Levens but then was bested by Chris Leben and Alan Belcher, which led to his release.

Stann, meanwhile, has won four of his past five fights, including a recent TKO victory over surging Leben. The former WEC light-heavyweight champ recently has stepped up his game under the tutelage of famed trainer Greg Jackson and his stable of fighters. His recent wins have come over the likes of light heavyweights Steve Cantwell and Rodney Wallace, and after a drop to middleweight, over Mike Massenzio. The lone defeat during his recent stretch came via decision to fast-rising Phil Davis.

With the announcement, the latest UFC 130 card now includes:

Email ThisBlogThis!Share to TwitterShare to FacebookShare to Pinterest
Labels: stann vs santiago