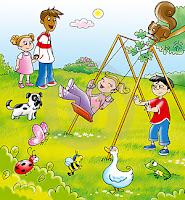 I think it's pretty universal for anyone over 40. When you were a kid, you hopped on your bike with your friends and went somewhere or did something. There were never any adults around. We played baseball or rode our bikes as far as we dared or whatever.

It reminds me a lot of global warming, this Ronald McDonald stuff. For example, if we blew up every single McDonalds today, would childhood obesity go down? Um, no. Same deal for our curly cue light bulbs. If we all use curly cue light bulbs, will this stop or reduce global warming. Um, no. But they're both the "right" things to do in leftie dogma, regardless of how flaccid the logic is.

This article is the 2nd one I've read from Lenore Skenazy. She's a nabob, but she seems pretty cool. Here's her blog: freerangekids.wordpress.com. Free range kids. Good one.

"Back in the 1970s and '80s, the crime rate was higher than it is now. Yet our parents let us play outside not because they thought crime did not exist—they weren't idiots—but because they weren't yet in the grip of predator panic."
- Lenore Skenazy

And Lenore talks about a product called Toothprints which is "a $5.99 plastic wafer that records the size and shape of your child's teeth so police can identify the body even if it's badly decomposed."

I was incredulous. Lenore was making shit up.
Wrong.
Toothprints... here it is, from some "child safety" website. 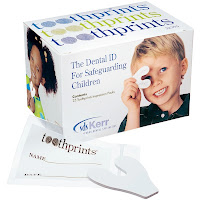 "Bridesmaids" is a girlie version of the raunchy buddy comedy genre that has had a popular run these last few years. This movie is the female version of  "40 Year-old Virgin" or "Old School" or "Hangover". It was fun and worth seeing. I enjoyed seeing the female protagonist scream the "C" word at a young high school girl. He he.

Also kind of interesting... as the credits rolled and the lights were turned up in the theater, a lot of the girls in the crowd just kept on laughing. I think the female review of this movie will be substantially higher than 3 bill-stars. For us guys, it was fun and enjoyable and the movie has a positive feeling throughout.

And I say huzzah to any girlie movie that isn't just goo.
the c word... yow, bill 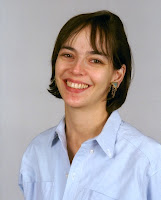