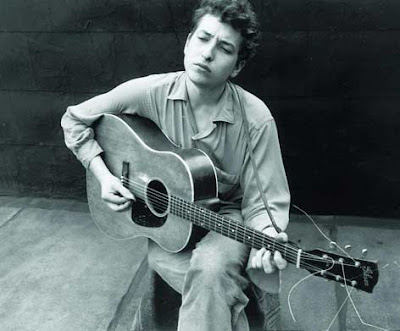 Bob Dylan 70 birthday. bob dylan is 7o years old today, may 24, 2011 - and for 50+ years of that life, he has been making some incredible music. and dylan is still going strong, putting out albums and continuing to tour the world. not only is dylan touring these days, but his artwork now does it's own touring! and dylan himself shows no signs of slowing down - kicking off a european tour next month.
in one word dylan is iconic. and, to slip in a second word, he is still relevant today. just last month, as an example of how ubiquitous his impact is - fordham law school held a two day conference on dylan and the law! check out this interesting factoid: "According to the National Law Journal, a 2006 study determined that Bob Dylan is the musician most cited in appellate court opinions." as a lawyer, i find that tidbit nothing short of remarkable.

ironically, my all-time favorite dylan song is "joey" - a mid-70's release that dramatized (fictionalized) the life of mobster joey gallo. dylan rarely plays it in concert, but a fantastic live version of the song is on "dylan and the dead," released a decade after he originally recorded it.

another of my favorite dylan connections is his relationship with the beat generation. and that with allen ginsberg, to be specific. here is a poem ginsberg wrote about dylan's work, appropriately titled, "on reading dylan's writings," that he penned in london, during the summer of 1973.

Those "chains of flashing images" that came to you at night
were highest farm boy's day dreams
that glimpse the Angels light.

It wasn't dope that gave you truth
nor money that you stole-- was God himself that entered in
shining your heavenly soul.

it was reprinted in rock sessions magazine, hamburg, germany, 1979.
Posted by admin at 12:54 AM