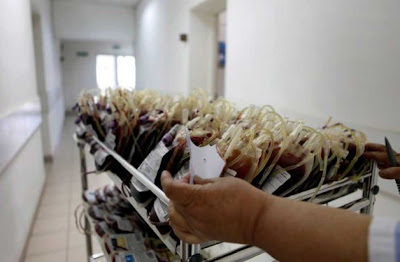 bulgaria black market blood. her 85-year-old husband needed immediate surgery but doctors told her to find blood for the operation herself. So Slavka Petrova swallowed her anguish and went to haggle on the black market outside the national blood clinic.
It's a grim reality for patients and families in Bulgaria, a struggling EU nation where donors are troublingly scarce, hospitals are strapped for funds and blood traders — mainly Gypsy, or Roma, men — are thriving.

Trading in blood and blood products is illegal in Bulgaria, punishable by a fine of up to €5,000 ($7,100). But lawyers say it's difficult to prove an illegal blood transaction because that requires an official complaint lodged by the person who pays the donor — and families are so desperate they consider the black market blood donors lifesavers.

In the streets around the blood clinic, a dozen men sit smoking on benches or in cafes, on the alert for people in need. They don't have to wait long.

"Even before I had decided what to do, three men stood in front of me and one asked me what blood group I was looking for," Petrova, an 82-year-old former government employee, told The Associated Press.

The price can be prohibitive.

Once a deal is struck, a donor hanging out nearby — or at most a phone call away — is summoned, and turns up at the blood clinic masquerading as a relative. He gets a proof of donation certificate and sells it to the desperate family. The blood heads off to be checked, and if it is found to be disease-free it goes toward filling the clinic's reserves.

So, lifesavers or bloodsuckers? It depends on where you sit.

Mariana Shipkovenska favors the first description. The former journalist had to rely on paid blood donors when her 89-year-old mother had surgery for a fractured thigh bone. She said she would have given blood herself but after a medical check her doctor advised her not to.

"They are the ones that give you something priceless when you need it and you can't find it anywhere else," she told the AP.

"I don't think it is a crime to help people who are in need," one told an AP journalist, refusing to give his name for fear of prosecution. "I haven't been able to find a job for years now and selling blood is a way for me and my family to survive."

Health workers at the blood center are well aware of the illegal transactions but feel powerless to do anything. At most, they ask police to shoo the traders from the entrance door, but the men soon return.

The deputy director of the center, Natalia Masharova, admitted that there was no legal way to prevent the practice.

"Although it is not legal, everyone is free to come and donate blood," she said.

Often the center itself loses out in the transaction. Blood found to be infected with HIV or Hepatitis B or C is thrown out and the donor put on a blacklist, but that takes time and the donation certificates are issued immediately, Masharova said.

Her boss at the center, Andrei Andreev, told AP the national clinic has enough blood to help those in need and urged people not to turn to the black market. But Rumen Dimitrov, a surgeon at ISUL, one of the main hospitals in Sofia, the capital, says the lack of sufficient blood supplies is a problem he runs into every day.

"We often have to ask relatives of our patients for certificates for blood donations because we receive only one liter of blood for a surgery from the blood center. In some cases two or more liters are needed," Dimitrov said. "Due to lack of enough blood, some scheduled surgeries are being postponed by weeks."

Up until 1989, when the Balkan nation was under a communist government, Bulgarians were eager blood donors. Army conscripts were awarded a two-day home leave each time they donated blood.

But voluntary blood donation has been gradually shrinking here over the past two decades, leaving Bulgaria above only by Albania, Bosnia and Moldova in Europe in the percentage of voluntary donors — 23 per 1000 people. The average for the United States is 53 per thousand, according to the American Association of Blood Banks, a figure similar to most EU countries.

"Only few become voluntary blood donors, because most people donate blood only if a relative or a friend needs it," said Stavri Toshkov, a leading hematology expert. "It is difficult to overcome the crisis of blood donation. Economic hardships have led to a deficit of such important values in society as solidarity, compassion and the willingness to help."

Bulgarian authorities are now urging residents to show compassion with those in need by joining blood donor campaigns. The Red Cross and the Christian Orthodox Church launched a two-month campaign around Easter dubbed "Light a candle, donate blood," hoping to raise awareness about the country's chronic blood shortage.

"It is the only way to eliminate the illegal trade," said Evelina Dinkova, one of the campaign's main organizers.
Posted by admin at 1:02 AM