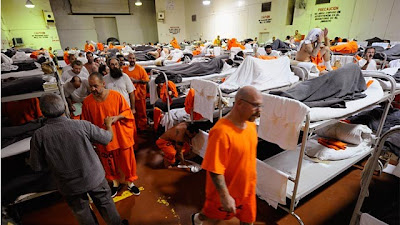 California prison population. Even before the U.S. Supreme Court ruled Monday that California must drastically reduce its prison population, the state had begun taking steps to relieve severe overcrowding at the direction of a former actor-turned-governor who alternated roles between get-tough cop and social worker reformer.
Former Gov. Arnold Schwarzenegger insisted in 2005 that the Department of Corrections be renamed to include "Rehabilitation" in its title.

As the prisons' population swelled to an all-time high in 2006, the Republican governor declared a public safety emergency. He then used his emergency powers to begin transferring more than 10,000 inmates to private prisons in other states.

He signed legislation last year that increased early release credits, made it more difficult to send ex-convicts back to prison for parole violations, and rewarded county probation departments for keeping criminals out of state prisons.

Yet Schwarzenegger fought intervention from federal judges in California's prison operations all the way to the Supreme Court, losing in a narrow 5-4 decision this week. He also fought an attempt to limit the state's tough three-strikes law that, along with other sentencing changes, helped fuel the overcrowding.

Monday's ruling will force the state to lower its prison population by some 33,000 inmates over the next two years. The justices said it is the only way to ease overcrowding so severe that it led to unconstitutionally poor treatment of mentally and physically ill inmates.

With Schwarzenegger out of office since January, the task will fall to his successor, Democrat Jerry Brown. Brown has signed a law shifting responsibility for tens of thousands of criminals from the state to local jurisdictions, though there is currently no money to fund the transfer.

Now the former governor is getting mixed reviews on the steps he took to transform a prison system that once was so crowded nearly 20,000 inmates lived in makeshift housing in gymnasiums and other common areas, often sleeping in bunks stacked three high.

"My frustration was that the governor just didn't want to address sentencing reform or implement the kind of policies that made sense," said Jeanne Woodford, who briefly served as Schwarzenegger's corrections secretary in 2006 before abruptly resigning. "(By the end), he came to see that criminal justice reform was absolutely crucial."

Schwarzenegger's handling of criminal justice issues came under new scrutiny this year when, hours before leaving office, he commuted the prison sentence for the son of a political ally, former Democratic Assembly Speaker Fabian Nunez. Esteban Nunez was serving a 16-year prison sentence for manslaughter until Schwarzenegger cut it to seven years. The victim's family and San Diego County prosecutors are asking the courts to overturn Schwarzenegger's decision because he failed to inform the victim's family as required by state law.

Last week, Schwarzenegger made more headlines by revealing he had fathered an out-of-wedlock child, a secret he kept through two terms as governor. He and his wife, Maria Shriver, have announced they separated after he revealed the secret to his family.

As governor, Schwarzenegger started down a path of corrections reform, only to meander away.

"In the first two years you have reform appointments made, you have moderation in rhetoric and you have some notion of trying to reintroduce reform," said Frank Zimring, a University of California, Berkeley law professor who has studied California prisons for nearly 30 years. "Everyone was waiting for the reform agenda to get specific, and it didn't. ... The governor's political capital never got invested in that reform."

Still, the laws he signed have reduced the prisons' population by about 5,500 inmates since they took effect last year. The state also has been able to do away with nearly two-thirds of its makeshift beds, although more than 7,000 inmates remain in temporary housing.

That gave the state a head start on reducing the prisons' population to meet the high court's mandate.
Posted by admin at 1:03 AM