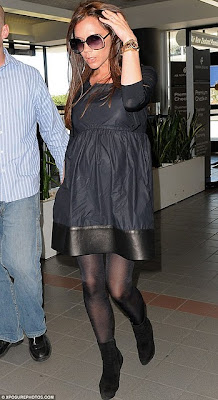 Victoria Beckham shows bump. VICTORIA Beckham proudly displayed her baby-bump for the first time, having successfully concealed the growing pregnancy in tight trousers and flowing tops until now.
The 36-year-old mother-of three looked relaxed and comfortable as she walked through Los Angeles International Airport in a grey poncho-style dress.

But even though Victoria is six months pregnant, she seems reluctant to give up her much loved killer heels, and strode through the terminal in towering black ankle boots.

The former Spice Girl, who is expecting a longed-for girl, has been careful to cover her growing stomach whenever out and about recently.

At the weekend she was spotted clutching a long black cardigan protectively over her bump as she cheered on son Romeo, eight, at his football game near Los Angeles.

It has been business as usual for designer Victoria with her fourth pregnancy.

She is maintaining a busy schedule running her fashion label, supporting husband David, 35, at his football games and ferrying about Romeo and his brothers Brooklyn, 12, and Cruz, six. It is rumoured that Victoria wants to continue the Beckham tradition of giving their children unusual names.

She is thinking of calling her daughter Santa, after the LA suburb of Santa Monica. Brooklyn was famously named after the New York district where he was conceived.

A source said: "Posh thinks Santa Beckham has a lovely ring to it and wants something unique.
Posted by admin at 12:53 AM