I'm starting to wonder about my decision to live in the tallest building in the city. About 10 minutes ago the sun was pleasantly going down, some rolling clouds were rolling in when... BAM!

A thunder clap hit so loud and hard you'd swear blood was coming out of our ears. Within 30 seconds the entire sky was black and the winds were threatening to bust in the windows. Moments thereafter there was a flash of light and suddenly all the alarms in the building went off.

We had just been hit by lightning, one floor up and two floors over is apparently where the brunt of the damage is. Sleep tight tonight everyone... I know I won't!! :-) 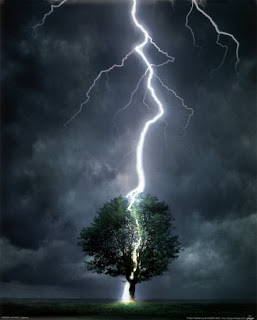