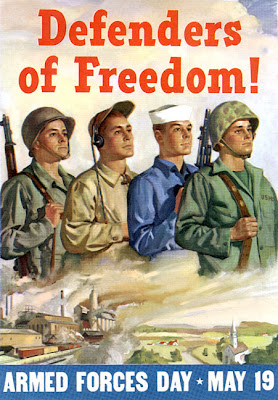 Armed Forces Day. Today we honor and celebrate the men and women of the United States armed forces. The Armed Forces Day celebration began when President Harry S. Truman led the effort to establish a single holiday for citizens to come together and thank military members for their patriotic service in support of our country.The single-day celebration, stemming from the unification of the Armed Forces under one department, the Department of Defense, replaced separate Army, Navy and Air Force days.

“Armed Forces Day honors you, the Coast Guardsmen, Soldiers, Sailors, Airmen and Marines who proudly wear the uniform. Your tireless work and sacrifice, and your ability to unite to overcome complex operational challenges, whether on land, air or sea, keeps our Nation safe, strong and free. Thank you for your service, and for the sacrifice of your families. Semper Paratus,” said Coast Guard Commandant Adm. Bob Papp.
Posted by admin at 9:50 AM