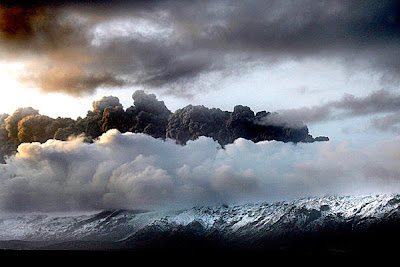 Ash cloud causes delays across the UK. Ash cloud over Europe could last for months.
The volcanic ash cloud over Europe continued to delay flights across the continent on Friday. The ash cloud is affecting the Afghanistan war. Scientists say that the cloud could continue to last for weeks, or even months. Airports in the United Kingdom will remain closed until at least 1 a.m. on Saturday.
For the second straight day, ash from a volcano in Iceland has continued cause major flight delays across Europe. Only 11,000 of the nearly 28,000 flights that normally pass over Europe are expected to take place on Friday, according to Eurocontrol, an intergovernmental organization that manages air traffic in Europe.

Stranded travelers are likely to take little solace in reports from scientists who warn that the eruption creating all the ash may continue for days, weeks, or even months. It remains difficult for scientists in Iceland to ascertain how long the eruption is likely to continue. As of Friday morning, the webcams used to monitor the volcano are still covered in a cloud of ash, reports the BBC. The main problem, however, is not the eruption, but the winds pushing the ash towards Europe.
Minimal effect on US

Although the cloud will eventually reach the US, ABC News reports that it will likely not create problems for domestic flights. However, grounded flights in Europe have affected US flights due to fleet planning issues created by planes stuck in Europe.

"This stuff will go all around the world, but by the time it gets back to the West Coast of the United States, [it'll have] pretty well fallen out to the point where it's not a danger to us," Nance told "Good Morning America" today. "But we've never seen [such a volcanic disruption] on a scale like this where it has hit a tremendous beehive of daily aviation activity."
Although the ash cloud has not had a significant effect on visibility in Europe, aviation officials have canceled flights due to concerns that ash could damage engines of planes flying at high altitudes.

Many heads of state, including President Obama, planned to fly to Poland for Sunday's funeral for President Lech Kaczynski, who was killed in a plane crash a week ago. But the closure of Krakow airport had prompted speculation that the service would be postponed. But it appears the funeral will proceed as planned.

"The will of the family is that in no circumstances should the date of the funeral ceremonies be changed, and that they should go ahead as planned," presidential aide Jacek Sasin told reporters Friday.
UK airspace closed until at least Saturday

The United Kingdom will keep their airspace closed to all but emergency flights until at least 1 a.m. on Saturday, reports CNN. Meanwhile, air transport and weather officials are discussing contingency plans in the event the ash cloud continues to create problems.

The closure has also affected US Air Force operations in support of Iraq and Afghanistan that are flown out of two bases in England. Dozens of fighter jets and tankers have been grounded until the situation changes.

The potential economic impact of the air travel delays has yet to be determined, but Associated Content reports that it may be similar to last month’s seven-day British Airports Authority strike. The strike did not close down all major airports though, so the ash cloud is expected to take an even greater toll on the airline industry. “As the world is in the midst of an economic recovery, the volcanic eruption could not have come at a more difficult time,” write the Associated Content.

Major airports across Europe remain closed as aviation officials wait for the ash cloud to disperse. Bloomberg offers a complete listing of airport closures by country.
Posted by admin at 7:41 AM

Email ThisBlogThis!Share to TwitterShare to FacebookShare to Pinterest
Labels: Ash cloud causes delays across the UK