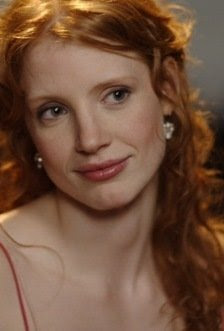 The movie, a meditation on life set against the background of a Midwestern family in the 1950s that also stars Sean Penn, arrives in select U.S. movie theaters on Friday.

But that's not the only film the newcomer has on her resume, nor the only A-list actors and directors who want to work with her. Later this summer Chastain stars in the drama "The Help," based on Kathryn Stockett's best-selling novel; "The Debt," an espionage drama starring Oscar-winner Helen Mirren; and the crime drama "The Fields" opposite Sam Worthington.

Two more of her films are scheduled to come out this fall -- one opposite Al Pacino -- and still others in 2012.

"I've made 11 films, nine are (waiting for release), Chastain told Reuters in an interview. "I'm a little worried that people will get sick of me. But because the characters are so different in each film, hopefully they won't."

Blame it on Malick, the semi-reclusive but revered filmmaker who gave Chastain her big break in "Tree of Life." Though the director's films -- including "Badlands" and "The Thin Red Line" -- are hardly commercial hits, the critical acclaim they engender makes Hollywood sit up and take notice.

"Tree of Life" was shot three years ago but Chastain said her association with the film instantly "changed my world" and "opened doors for me to work with other directors."

It's not the first break to come her way. A native of northern California, Chastain attended the prestigious Juilliard school in New York on a scholarship from Juilliard alumni, actor and comedian Robin Williams.

"That was huge. It paid for my apartment, my books, my tuition. It paid for me to fly back and forth to see my family," said Chastain.

Yet the actress has never met Williams.

"I know at some point I'm going to meet him and it will be really special," she said. "Because I'm the first person in my family to go to college and I feel he made that possible."

As did her grandmother, who took Chastain to see a play when she was a girl, thus inspiring the youngster to pursue acting as a career. Her grandmother also helped Chastain move to New York for college.

"I was scared to live in New York and live in a dorm and she flew with me," said Chastain.

While in her last year at Juilliard, Chastain's class went to Los Angeles to showcase their talents to the entertainment industry. From there, Chastain landed a television deal with Emmy Award-winning producer John Wells' company.

"It was a blessing because I got to live in New York and do theater and the company would fly me out to L.A. to do television," said Chastain.

The transition to film occurred when Chastain was cast in the title role of a Los Angeles theater production of Oscar Wilde's "Salome," directed by and starring Al Pacino, in 2006.

Pacino decided to also direct a film version of the play -- part documentary/part fiction -- called "Wilde Salome" with the same players. The film is now scheduled to premiere at the Venice Film Festival in September.

"I learned how an actor changes a performance from (being in) a theater of 1400 people to a single camera. Al was like my acting teacher during that whole process," Chastain said.

Things came to a head for Chastain at the Cannes film festival earlier this month where "Tree of Life" not only walked away with the Palme d'Or, but her psychological thriller "Take Shelter," with Michael Shannon, won the grand prize in the Critics Week competition.

Things got even more intense at the festival when the Prohibition-era drama "The Wettest Country in the World" -- which she shot with Shia LeBoeuf -- found itself in the middle of a bidding war with distributors. It was picked up by the Weinstein company for a release in 2012.

"I will never experience anything like that again," said Chastain of her first Cannes experience. "I'm still recovering. It was a week of living on pure adrenaline, no sleep and a lot of excitement."

Source:yahoo
Posted by admin at 2:06 PM