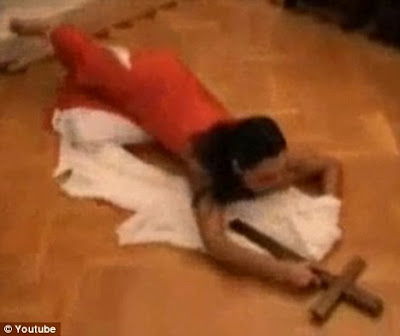 Lap dancer turned nun angers Pope. Pope Benedict XVI has closed a monastery, visited by Madonna, where a stripper turned nun was a star attraction.
Vatican officials launched an inquiry following claims of 'liturgical abuse' at the monastery, after reports that the nuns were dancing around the altar during services.

Among them was sister Anna Nobili, 38, who became an overnight YouTube sensation after footage of the stripper-turned-nun preaching was posted on the internet.

The order of Cistercian monks are based in the monastery, which is in Rome's Basilica of the Holy Cross in Jerusalem.

It is one of the Catholic Church's most popular shrines and contains relics from Christ's Crucifixion.
Posted by admin at 7:28 AM