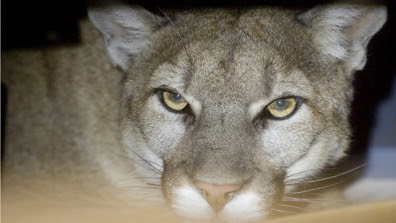 Man Finds Mountain Lion In His Garage. A California father of five rooting around his garage for what he thought was a raccoon or other small critter was suddenly face-to-face with a mountain lion.
Jesse Taylor's wife called 911 Tuesday morning after he discovered the big cat in the garage of their home in Hesperia, a Mojave Desert community about 80 miles northeast of Los Angeles.

The Victorville Daily Press reports neighbors had seen the mountain lion roaming the area since Friday.

California Fish and Game, Hesperia Animal Control and San Bernardino County sheriff's officials showed up, tranquilized the cougar and released it in the San Bernardino National Forest.
Posted by admin at 7:29 AM

Email ThisBlogThis!Share to TwitterShare to FacebookShare to Pinterest
Labels: Man Finds Mountain Lion In His Garage