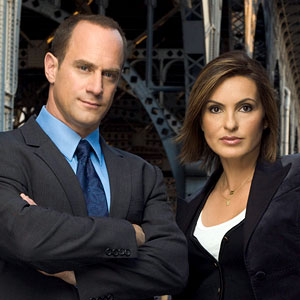 Mariska Hargitay is sounding off on Law & Order: SVU costar Christopher Meloni's exit from the show.

"For the past 12 years Chris has been my partner and friend, both on screen and off," Hargitay told TVLine. "He inspired me every day with his integrity, his extraordinary talent and his commitment to the truth. I love him deeply and will miss him terribly—I'm so excited to see what he'll do next."

Meloni, who played Detective Elliot Stabler alongside Hargitay's Detective Olivia Benson, announced his decision to leave the sex-crimes drama after 12 seasons last week amid rumors he was flying the coop.

"It is true—12 great years and time for the next chapter," a rep for Meloni told E! News.

While Hargitay will remain on the show for its 13th season, even her character will be scaled back at the midway point, with Benson reportedly being promoted to a more senior (and far less featured) position in the police department.

The duo has appeared on the show together since it premiered in 1999.

While we know no one can fill Stabler's shoes, who do you think should star opposite Benson in the upcoming season?