The Most Colorful Places on Earth

The Most Colorful Places on Earth 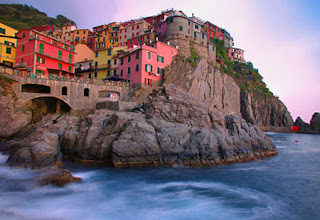 Manarola, Italy
The charming fishing village of Manarola is the oldest of the five northern coastal towns that make up the Italy's Cinque Terre, and it is among the smallest. The multicolored buildings that reflect the rich Italian sunlight are a perfect starting point for the Love’s Walk , which leads between Manarola and nearby Riomaggiore. Celebrate afterward with the local wine, sciacchetra. Enjoy the peaceful seaside atmosphere, as cars are not allowed in town; travelers get there by shuttle bus, on foot or by boat. 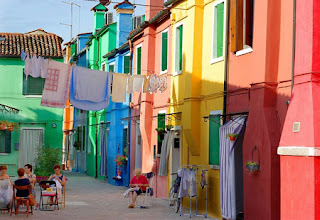 Burano, Venice
Not to be confused with the Venetian island of Murano, famous for its glass, the cheery fishing village of Burano is known for its lace — and a kaleidoscope of painted houses. Some accounts suggest they were painted so brightly so the fishermen could see their homes from far out at sea. A short boat ride from Venice, Burano is small, but it is worth a day trip to visit the Museum & School of Lace-Making — closed for restoration through June 2011 — and to stroll amid the four islands and canals that make up this quiet yet vibrant village. 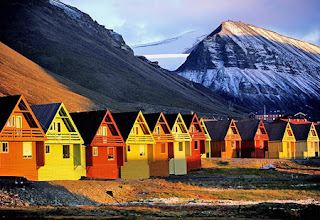 Longyearbyen, Norway
Each November to January, Longyearbyen is cloaked in darkness as the sun sinks below the horizon for the "polar night." You could hardly blame the 1,800 people who live here for wanting to add vivid color to their environment. This outpost is the main community on the archipelago of Svalbard — which means, appropriately, "cold coast" — which lies between Norway and the North Pole. Sixty percent of the land here is covered by glaciers, but there’s fun to be had. People travel here for activities as varied as kayaking and dog-sledding to fossil hunting and snowmobile safaris. 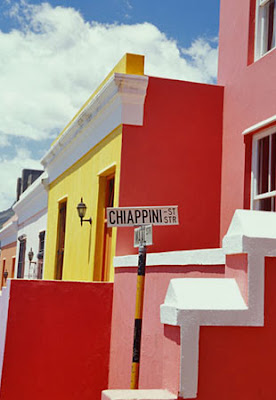 Bo-Kaap, Cape Town
The Cape Town neighborhood of Bo-Kaap is also known as the Cape Malay Quarter and has a history as colorful as its houses. In the 17th and 18th centuries, this area on Signal Hill was settled by slaves brought by the Dutch East India Co. from Malaysia, Indonesia and Sri Lanka. Today, Bo-Kaap reflects a long Muslim heritage in its mosques, minarets and kramats, shrines to Muslim saints. You’ll likely never be asked for the correct time here: Everyone sets their watches by the "noon gun," which has been fired off every day at noon since 1806. 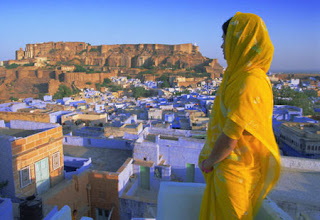 Jodhpur, India
From the impressive Mehrangarh Fort high on a hilltop overlooking Jodhpur, it’s easy to see why this city in Rajasthan is sometimes called the Blue City. The azure buildings of the old town shine brightly in the almost perpetual sunshine; Jodphur sits on the edge of the Thar Desert. Just as colorful are the city’s many markets, which sell everything from saris and linens to silver jewelry and wooden carvings. 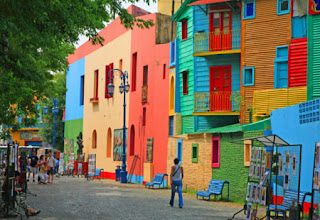 La Boca, Buenos Aires
If you’re lucky enough to be in the Buenos Aires neighborhood of La Boca when the Boca Juniors soccer team has a match scheduled, head to La Bombodera and watch the local heroes in action. They are serious about soccer in this lively harbor town known for its brightly colored houses, especially along Caminito street. How did the tradition start? The story goes that early residents had to borrow paint from the nearby shipyards, but today the color fits in perfectly with this artist's neighborhood. While visiting, be sure to try the local Italian food, a specialty of La Boca thanks to its strong Italian heritage. 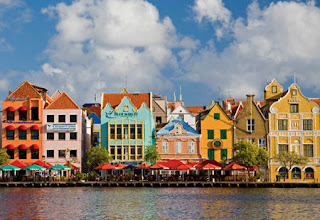 Punda, Willemstad, Curacao
Curacao is the “C” in the Caribbean’s tiny ABC islands: Aruba, Bonaire and Curacao. A trip to the island starts in Willemstad, where the Punda historic district on St. Anna Bay exudes a 17th-century Dutch colonial atmosphere. While the construction of the buildings along the harbor is European Baroque, the color palate is uniquely Caribbean: mango-orange, guava-rose, avocado and papaya, to name a few. The island’s steady warm temperatures, trade winds and location outside the hurricane zone make this a perfect escape for beachcombing and diving in the coral 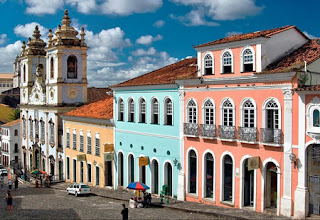 Pelourinho, Salvador, Brazil
Look beyond the colorful Baroque buildings in old-town Salvador and you will discover this neighborhood’s dark origin. "Pelourinho" means whipping post; this region was the heart of the Bahia slave market until 1835. The history of slavery lingers in sites such as the Igreja Nossa Senhora do Rosario dos Pretos, a church built by slaves so they would have a place to worship, and in Castro Alves Square, named for the abolitionist poet. Today, African and Brazilian cultures cross in the form of music and culture. Visit Pelourinho on a "Blessed" Tuesday night, so-called because the poor received free bread from the church on Tuesdays, and see how it comes alive as bands set up on the streets and play Afro-Brazilian music while people dance, eat and party. 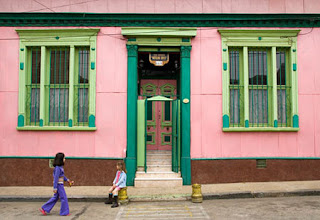 Valparaiso, Chile
Valpo, as it’s called locally, is an important Chilean port city wedged between the Pacific and a band of steep hills. As a result, the colorful houses were built at precipitous angles and connected by narrow stairways and funiculars, and interwoven with labyrinthine cobblestone streets. Valparaiso’s colonial history lends color to the architecture, and during its heyday as the main stopping point for ships traveling through the Straits of Magellan, it was called the Jewel of the Pacific and Little San Francisco. Now a UNESCO World Heritage Site, Valpo was once the home to Salvador Allende and Pablo Neruda, among others. Wroclaw, Poland
Wroclaw’s complicated history stems from being part of multiple cultures: German, Austrian, Polish, Prussian and Bohemian. Today, that means travelers to this city on the River Oder find a striking architectural palate, ranging from Baroque and Renaissance to Gothic and Art Nouveau. St. John’s Cathedral in Old Town, Market Square, Town Hall and the university are popular attractions. 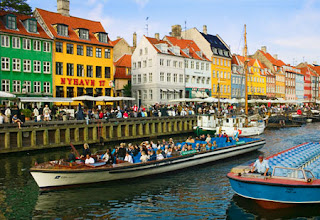 Copenhagen, Denmark
Hans Christian Andersen lived along this picturesque waterfront in Copenhagen — called Nyhavn, or New Port — while writing some of his children’s books. In his day, the canal was clearly divided: The rich lived on the shady south side of the canal, where houses were made of stone. The common folk lived on the sunny side, with odd-numbered buildings, where the cheaper wooden houses were painted in luxurious hues. No. 9 is the oldest of the bunch, dating to 1661. Wooden ships add to Nyhavn’s historic maritime atmosphere, but it has now become so fashionable to live and visit here that the 24-hour restaurants, pubs and cafes have earned it the moniker "the longest bar in Scandinavia." 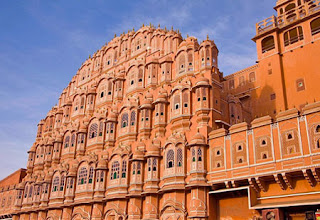 Jaipur, India
One look at the rosy sandstone used for building palaces such as the Hawa Mahal and it’s understandable how the capital of Rajasthan become known as the Pink City. This pink sandstone palace has almost 1,000 windows, which allowed royal women to look down on the busy street bazaars without being observed. Located in northwestern India, Jaipur is home to several famous palaces, including the opulent sandstone and marble citadel called the Amber (or Amer) Fort, which blends Hindu and Moghul architecture and overlooks picturesque Maota Lake. 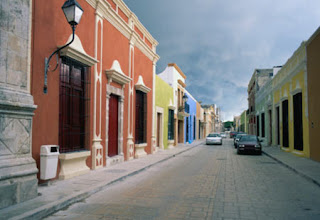 Campeche, Mexico
Like many colonial Mexican towns, Campeche was founded by the Spanish on top of an old Mayan city. While no evidence remains of the original "Kimpech," so many Baroque colonial buildings remain here that in 1999 it was named a UNESCO World Heritage Site. Even more distinctive than the cheerful buildings are the walls that surround the city, built by the Spanish in the late 1500s to protect this important Caribbean port from pirate attacks. Today, the checkerboard streets lined with pastel-hued houses make it a wonderful side trip from the Yucatan, to the northeast, and the larger colonial city of Merida. 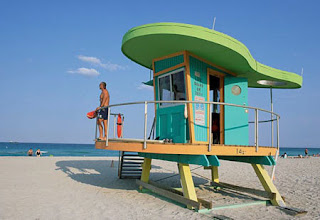 Miami
Stroll along Ocean Drive and Washington and Collins avenues and you’ll see the ice-cream-colored architecture from the 1920s and '30s that was resurrected with unique Miami flair. More than 800 buildings in Miami Beach and South Beach are now living examples of Art Deco, Mediterranean Revival and Miami Modern styles, all shimmering under the Florida sun in pastel splendor. Art Deco tours abound in the area, but the examples are hard to miss: Even lifeguard platforms have a touch of whimsy.
Posted by admin at 10:44 AM