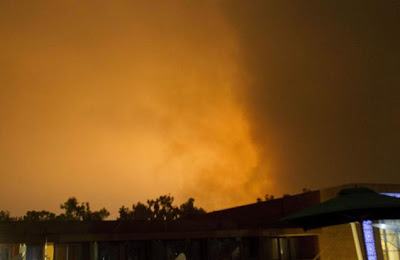 Nato Forces Hit Tripoli With Heaviest Bombing Yet. NATO pounded the capital with more 20 airstrikes Tuesday in its most intense bombardment yet against Moammar Gadhafi's stronghold of Tripoli, while a senior U.S. diplomat said President Barack Obama has invited the Libyan rebels' National Transitional Council to open an office in Washington. The international community has been stepping up airstrikes and diplomatic efforts against the regime in a bid to break a virtual stalemate, with the rebels in the east and Gadhafi maintaining his hold on most of the west.
The NATO airstrikes hit in rapid succession within a half-hour time span, setting off a series of explosions and sending up plumes of acrid-smelling smoke from an area around Gadhafi's sprawling Bab al-Aziziya compound in central Tripoli.

Government spokesman Moussa Ibrahim said at least three people were killed and dozens wounded in NATO strikes that targeted what he described as buildings used by volunteer units of the Libyan army.

NATO said in a statement that a number of precision-guided weapons hit a vehicle storage facility adjacent to Bab al-Aziziya that has been used to supply regime forces "conducting attacks on civilians." It was not immediately clear if the facility was the only target hit in the barrage. Bab al-Aziziya, which includes a number of military facilities, has been pounded repeatedly by NATO strikes.

At the Tripoli Central Hospital, the bodies of three mangled men in their twenties lay on stretchers, their clothing ripped and their faces partially blown away. A nurse, Ahmad Shara, told reporters taken on a government-escorted visit to the facility soon after the strikes that the men were standing outside their homes when they were killed, presumably by shrapnel.

One man who identified himself as a relative walked into the room where the bodies lay. He halted at their sight, turned around and pounded a wall as he cried out in despair.
Posted by admin at 7:40 AM