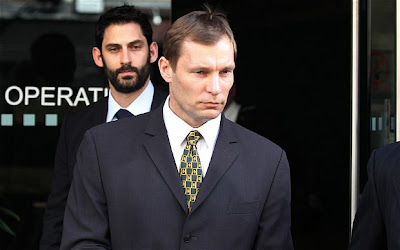 PC to face manslaughter charges over Ian Tomlinson death. The Metropolitan Police officer involved in the G20 protests death of Ian Tomlinson has been charged with manslaughter and will face trial.On Tuesday, the Director of Public Prosecutions decided that there was enough evidence to charge Scotland Yard officer PC Simon Harwood, who will appear in court next month.
The development comes after Keir Starmer QC vowed to launch a quick and "thorough" review of his decision not to prosecute after an inquest jury unanimously ruled earlier this month that the newspaper seller was unlawfully killed at the protests.

Mr Tomlinson collapsed after suffering an internal bleed as a result of the officer's "excessive and unreasonable" force, the jury said.

Mr Starmer released a statement on Tuesday morning, which read: "On 3 May this year I announced that the decision not to prosecute anyone in relation to the death of Mr Ian Tomlinson would be reviewed in light of the verdict of unlawful killing returned by the jury at the inquest into Mr Tomlinsonâ€™s death. That review is now complete and I have this morning met Mr Tomlinsonâ€™s family to tell them the outcome..
Posted by admin at 7:38 AM